Home News HARLEY-DAVIDSON ON BOARD WITH BJR FOR KIWI ROUND 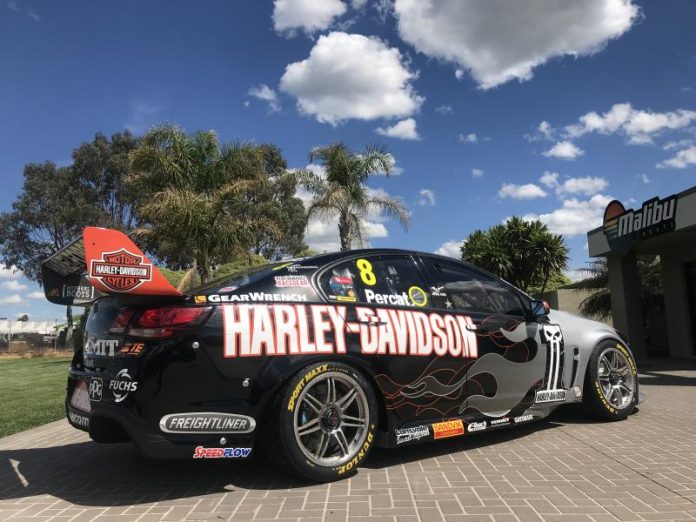 NICK Percat’s rotating sponsor base on the #8 Brad Jones Racing Commodore will continue this weekend at Pukekohe in New Zealand with the addition of Harley-Davidson to its flanks in a silver and black livery.

Recent rounds have proven to be tough for Percat, though the trip to Pukekohe is always special for BJR and whoever drives the team’s #8 Commodore given it was that number and entry under which the late Kiwi Jason Richards drove for the team.

Richards will be again honoured this weekend at Pukekohe as drivers compete for the Jason Richards Memorial Trophy, awarded to the top point-scoring driver over the weekend since Supercars returned to Pukekohe in 2013 and won by BJR with Jason Bright in that year.

“It’s fantastic to have Harley-Davidson on board for the Pukekohe event this weekend,” said team co-owner Brad Jones.

“Pukekohe is a special place for us for many reasons, mainly because of ‘JR’, we always race with everything we’ve got, but this event is something different. Hopefully he shines down on us this weekend.

“It doesn’t matter where you are in the world, people instantly recognise Harley-Davidson. The reveal is pretty exciting for us as it’s something we’ve had in the pipeline for a while which we finally get to show off.

“The livery is similar to what they run on the H-D1 Custom Shop Freightliner Truck they use in Australia to haul their gear and display bikes across country.

“It’s tough, and the flames are something we haven’t seen on a Supercar in a few years, so it’s cool to bring them back for this event.

“We had a function with Freightliner and Harley-Davidson two years ago in New Zealand, and their showroom and service centre in New Zealand was outstanding; well worth a visit.”

This weekend’s ITM Auckland SuperSprint at Pukekohe kicks off with practice on Friday.