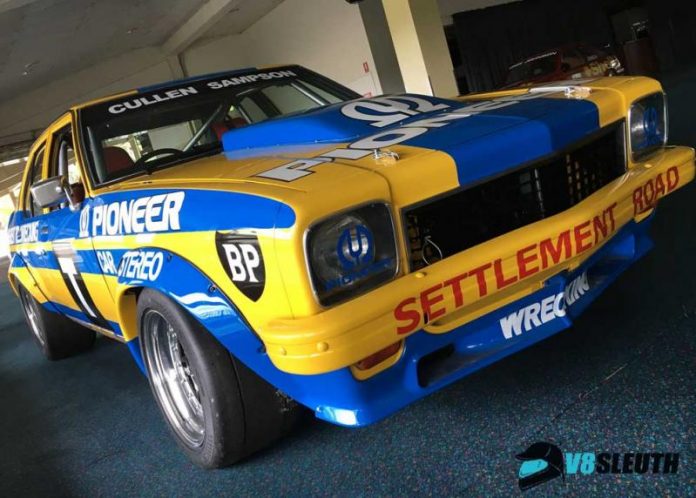 FORTY years on from its racing debut at Sandown in 1977, this genuine four-door Holden Torana A9X race car is has just been placed on the market and is expected to sell for over a quarter of a million dollars.

Listed here on the V8 Sleuth’sClassifieds Powered By Tickford page, this Group C V8 muscle car was built and raced by privateer Warren Cullen in the yellow and blue colours of sponsor Pioneer.

Beautifully restored to how it appeared as the Cullen team’s test car used in practice at the 1977 Hardie-Ferodo 1000 at Bathurst and featured last yearin Australian Muscle Car Magazine, the car was debuted by Cullen in the ’77 Hang Ten 400 at Sandown.

That race remains an important one in Australian touring car history given this year marks the 40th anniversary of the racing debut of the now-famous A9X Torana in that very race.

The legendary Peter Brock won that year’s Sandown classic in a new A9X Hatchback for Bill Patterson Racing with Cullen finishing seventh after starting 18th on the grid amid a field of 51 cars.

The Pioneer car, which was then used as the Cullen’s team’s test car for the ’77 Bathurst 1000, is special given it was built new as a four-door A9X, rather than many other four-door versions that had been L34 models upgraded to the new A9X specification.

This particular Torana continued racing in the hands of a range of owners in both touring car and Sports Sedan competition with its ownership and racing history fully tracked over its lifetime.

It was purchased by current owner Craig Bowring and lovingly restored, re-appearing at the ‘retro’ Sandown 500 Supercars round last September.

“I’ve had a few of these types of cars but the pinnacle of a Torana is an A9X and especially a Group C car,” he says.

“I always remember as a young boy my father wanted to buy an A9X two-door as a road car but the practical side of my mother pointed out that it wasn’t a very good family car!

“It was an era of Australian motor racing that sticks in my mind and in the minds of so many people.

“That 1970s period with Falcons and Toranas and drivers like Brock, Moffat, Grice, Bond, Morris and Harvey is the golden era without doubt.”

The Pioneer Torana A9X comes with its original CAMS Log Book and has been given a Certificate of Description (COD) by CAMS which makes it eligible for Historic motor sport given it was a genuine car that competed in the Group C touring car period, a rulebook era that covered 1973 to 1984.

Click here to view further details on the sale of this Group C muscle car.