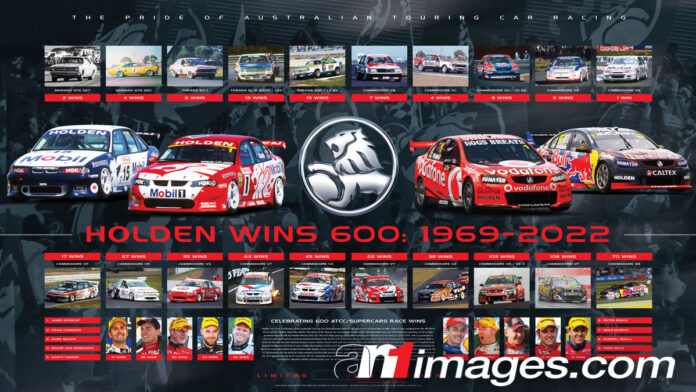 A licensed limited edition collector’s print has been produced to mark this unique milestone and it’s available to pre-order now from the V8 Sleuth Online Store here.

The numbered impressive print is set to be an instant favourite with Holden fans, celebrating some of the brand’s most memorable cars and drivers that have contributed to the 600 wins.

Highlighting the various models of Holden racing cars to have contributed to the 600 victories across Monaros, Toranas and Commodores, the print also celebrates the 10 most winning drivers aboard Holdens in championship history.

The first ATCC race win by a Holden came on August 31, 1969 at Surfers Paradise when Norm Beechey took victory aboard a Monaro GTS 327.

The Kiwi also won Holden’s 500th race – at Symmons Plains in 2016 – during his first season with Triple Eight Race Engineering.

Also announced this week is a limited edition, special liveried model Commodore with a unique one-off Holden 600 wins livery to mark the occasion.