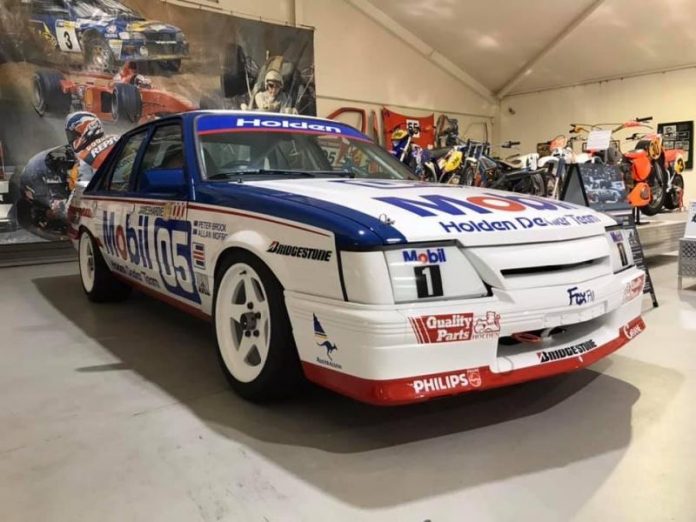 This is a piece of Australian motor racing history – the only car ever raced by Peter Brock and Allan Moffat as partners in the race that made them famous, the Bathurst 1000.

The 1986 #05 Mobil Holden Dealer Team Commodore VK Group A race car is a famous one given the pairing of Brock (then an 8-time Bathurst winner) and Moffat (then a 4-time winner).

Both Brock and Moffat have signed the transmission tunnel of his highly collectable piece of Australian motorsport history.

Famously crashed by Moffat in practice (see photo) and rebuilt by the MHDT team in time to make the race.

It’s a hugely significant car in Holden and HDT history – it’s the last factory-backed HDT race car to win a race – the 1987 Wellington 500 in New Zealand with Brock and Moffat driving, prior to Brock’s highly-publicised bust-up with Holden.

Car made its racing debut at 1986 Castrol 500 at Sandown and took pole position before racing at Bathurst as well as in the Calder 300 enduro (runner-up) and Adelaide AGP meeting.

Raced by Brock in early 1987 as a VK, later converted to VL spec and raced by Neil Crompton in his debut touring car events with the Mobil team.

Sold to Western Australia in 1988 and returned to the east coast a few years ago.

One of six Mobil HDT Group A Commodore VK race cars built and no doubt the best of the five that remain in Australia.

Car comes complete with all of its original CAMS Log Books (for both its VK and VL lives) and has undergone complete pain-staking restoration to its 1986 Bathurst livery and technical specification by Tom Rogers and Rick Wyatt.

Currently on display at the National Motor Racing Museum at Mount Panorama, Bathurst, this is a car that no doubt will attract huge attention in Australia and overseas.

V8 Sleuth is handling the sale of this car on behalf of its private collector owner.