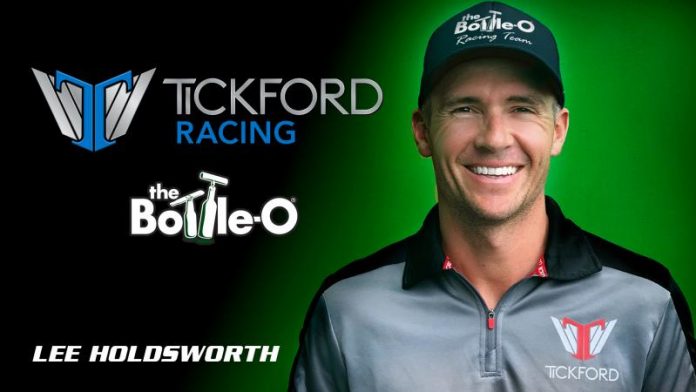 Replaces Winterbottom in #5 The Bottle-O Ford …

THE seat swap between Mark Winterbottom and Lee Holdsworth for 2019 is compete with confirmation today from Tickford Racing that Holdsworth has signed to drive the team’s #5 The Bottle-O Ford Mustang in next year’s Virgin Australia Supercars Championship.

Winterbottom has already been announced as Holdsworth’s replacement in Charlie Schwerkolt’s #18 IRWIN-backed Commodore ZB for next year, the news today completing an effective swap between the drivers.

Holdsworth will be entering his 14th season full-time in the championship next year and embarking on his first in a Ford since he joined Stone Brothers Racing in 2012.

Sponsor The Bottle-O has also confirmed it has re-signed with Tickford Racing, taking its relationship with team co-owner Rod Nash into its 13th year.

“I’m pumped to be teaming up with Tickford Racing and The Bottle-O,” Holdsworth said.

“Even though they feel they had a tough year, I believe Tickford Racing is still one of the best teams in the paddock.

“I’m feeling fit and driving as well as ever, so I’m ready to show what I’ve got. It’s exciting to have the support of The Bottle-O, and I look forward to rewarding them with a great 2019 season.”

Holdsworth has endured one of his toughest seasons in Supercars this year, finishing 21st in the Driver’s Championship – his sixth season in succession finishing outside the top 10 in the final pointscore.

His last race win came at Winton in 2014 with Erebus Motorsport in its Mercedes E63 AMG, the result also his last podium result in the championship.

Holdsworth is a three-time Supercars race winner with four pole positions to his name (the last at Sydney Olympic Park in 2010 with Garry Rogers Motorsport) and 13 podium results.

He becomes teammates with Chaz Mostert and Cameron Waters as well as stablemates with the Tickford-run customer 23Red Racing Mustang of Will Davison – Davison and Holdsworth were teammates at Erebus Motorsport in 2014.