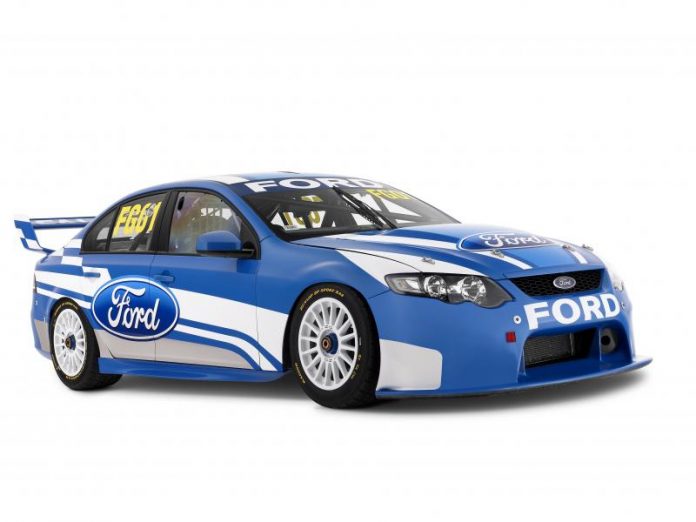 EAGLE-EYED V8 Sleuth readers will have spotted our logo on the front bumper bar of the 2015 Dunlop Series-winning Enzed Falcon of Cameron Waters at the final two rounds at Bathurst and Sydney.

An opportunity for us to get our brand out and about came up with a fast, exciting young driver so we took it!

But what many Supercar racing fans may not know is the history of the car that we supported, which takes Ford fans all the way back to the introduction of the FG model Falcon V8 Supercar.

The car we are referring to was known as ‘FG01’ and was the prototype FG Falcon V8 Supercar built in 2008 by Ford Performance Racing for Ford Australia for the homologation process of the new model.

It was originally dubbed ‘T2’ (the BA Falcon prototype built in late 2002 was known as ‘T1’), before this car became more commonly known as ‘FG01’.

Pace Innovations in Queensland did the initial chassis work before FPR finished the build of the car, which emerged in ‘nitro blue’ livery for its first public display at the Sandown V8 Supercar event on the Queens Birthday weekend in June 2008.

James Courtney was the first driver to turn public laps in the car at Sandown with Grant Denyer alongside in the passenger seat, after Craig Lowndes – who was initially going to drive the car given he was Ford-contracted at the time – was forced to pull out at the last minute.

The FG01 chassis was used for a range of aerodynamic tests before eventually making its racing debut at Sandown in 2009 with Steve Richards behind the wheel, the chassis now given FPR identity of FPR 808.

Richards ran it again at Queensland Raceway before it reverted to Dean Canto/Luke Youlden for the Phillip Island and Bathurst enduros. It was crashed by Canto at the Mountain and was not raced again for the remainder of ’09 as it underwent repairs.

In 2010 is became the #55 The Bottle-O Falcon of Paul Dumbrell run by FPR for Rod Nash Racing in its distinctive green livery.

He had Canto co-drive at the enduros, former F1 World Champ and Indycar Champ Jacques Villeneuve on the Gold Coast and then won his first-ever V8 Supercars Championship race in the car at Sandown.

Dumbrell retained the chassis and raced it throughout 2011 before it was turned over to David Reynolds to drive in the early part of 2012.

He swapped into Chaz Mostert’s Dunlop Series Falcon for Phillip Island so Mostert took over Reynolds’ car – this one – for the rest of the Dunlop Series.

The car made a single appearance in 2013 in the DVS in the final round in Sydney as the Shannons Supercar Showdown car for filming of the TV show at Calder. Then it was usedby Cameron Waters in 2014 and 2015, culminating in taking the DVS title last year.

Matthew White purchased this car and retains it as a spare in Melbourne – a car with plenty of history and one that is very special to us at V8 Sleuth!

Watch below as the FG01 Falcon is unveiled at Sandown in 2008: