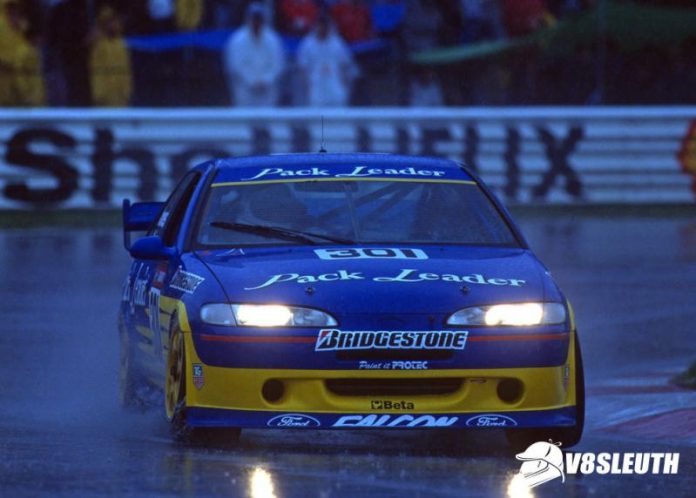 From a BBQ to a Bathurst winner!

IT’S not often that cars that are involved in fiery incidents at Bathurst are ever repaired and return in the years that follow to again compete in the race, let alone win it.

Built new in 1996 by Alan Jones Racing and run under the Pack Leader Racing banner, AJR EF95-1 debuted at Eastern Creek’s opening round of ’96 and was driven by Jones all season as the #301 Falcon after his departure from Glenn Seton’s team.

Allan Grice paired up with Jones for Sandown and Bathurst, before the now infamous BBQ took hold as Jones powered his way to the lead in the early stages of the Mount Panorama classic.

The car was repaired in time for the end-of-season sprint series in New Zealand, Jones driving it in Allied Pickfords colours at Pukekohe and Wellington.

It became the Komatsu Ford in 1997 and remained in AJ’s hands for the season, missing the odd race due to a lack of budget, before Jones was joined by that year’s Formula Holden champion Jason Bright at Sandown where the duo finished third and IndyCar ace (and the reigning Gold Coast Indy winner at the time) Scott Pruett and also Bright at Bathurst.

Jones qualified the car sixth on the grid and ran towards the front for most of the race though Pruett couldn’t match the former World Champion’s pace.

Bright handled the last driving stint when Jones wasn’t feeling strong enough to finish the race and they ended up 11th.

Bright joined the team full-time for 1998 with Pirtek backing, though this chassis only appeared twice in that year.

Following a nasty crash at Hidden Valley’s inaugural V8 Supercar race, this car was wheeled out for Bright for Oran Park’s series finale and then rested for Sandown before returning to action at Bathurst for he and Steven Richards to race.

As history shows, Bright crashed the car in practice and it was repaired in time so he could qualify 15th.

The team elected to pit out of sequence in the early stages of the race and were best placed when the leading HRT Commodore of Mark Skaife blew apart a Bridgestone tyre.

The win wasFord’s last until 2006, with Holden winning the next seven Bathursts straight until Craig Lowndes and Jamie Whincup won the inaugural Peter Brock Trophy.

AJR EF95-1 was sold in 1999 to Greg Crick, who only raced it once, so he sold it to Craig Harris, who was returning to racing after a lengthy lay-off and competed in the second half of the Shell Championship Series – as it was then known – in ’99.

He used it in the inaugural 2000 Konica V8 Lites Series (what we now know as the Fujitsu Series) before it was returned to its Pirtek #4 Bathurst-winning livery and restored in terms of engine, gearbox, brakes and the like.

Harris still owns it and it resides in Brisbane. Last time we checked he said he would potentially one day part with it – but only for the right price!

Bathurst-winning Falcons from the V8 Supercar era are relatively rare, making this car a smart investment for a savvy Ford race car collector.