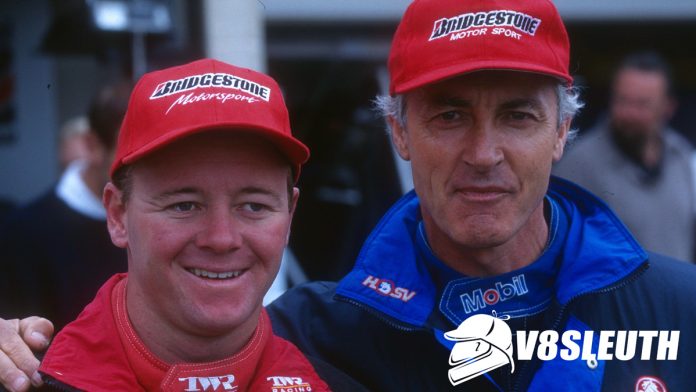 WE all know the story of Peter Brock’s emotional weekend at the 1997 Primus 1000 Classic.

In what was to be – at the time – his final tilt at the Bathurst 1000 aboard a V8-powered Commodore, the Holden Racing Team recruited Mark Skaife to give the ‘King of the Mountain’ his best possible shot at claiming a 10th victory in the race.

While the fairytale run of pole position and an early lead was curtailed by a mechanical problem with Skaife at the wheel, the future Supercars Hall of Famer wasn’t the only driver HRT had considered pairing with Brock.

Speaking on the V8 Sleuth Podcast powered by Timken, Jason Bargwanna reveals that he was told during 1997 that his name could join Brock’s on the #05 Commodore come October.

Listen to Jason Bargwanna on the V8 Sleuth Podcast powered by Timken:

Bargwanna was one of four drivers in the inaugural Holden Young Lions program, and had raced in the Bathurst 1000 previously but never in a car capable of challenging for the outright victory.

“At one stage there, (HRT team manager) Jeff Grech came to me and said ‘there might be a plan where we put you in with Peter,'” Bargwanna told the V8 Sleuth Podcast.

“There was a lot of things that go on behind the scenes; I was never told that it was going to happen, but I was told what was likely to happen – that was before Mark (Skaife) came along.”

While it wasn’t in the #05 HRT car, Bargwanna did tackle Mount Panorama that year, partnering with Mark Noske in the squad’s Holden Young Lions entry, sensationally qualifying on provisional pole before a heartbreaking shunt in Sunday morning’s warm-up session forced the #97 Commodore’s withdrawal from the race.

In the podcast, Bargwanna opens up on his pathway to Supercars – including a couple of white lies told to his bank! – plus his time at Garry Rogers Motorsport that culminated in a victory in the 2000 Bathurst 1000, among a wide range of topics.