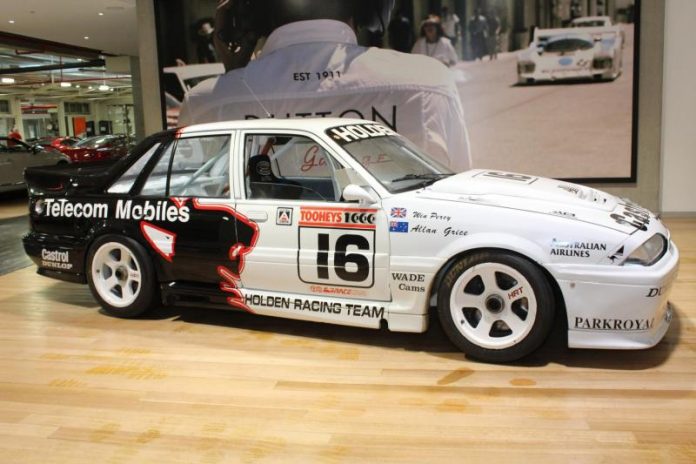 THE 1990 Bathurst-winning Holden Racing Team Commodore VL is officially on the market.

The Commodore that Win Percy and Allan Grice took to victory in the 1990 Tooheys 1000 is for sale via Dutton Garage in Melbourne.

Rumours have abounded of the car potentially hitting the market for some time, though it’s now official with the prestige car organisation placing the car in its online inventory on its website this week.

The car – HRT 025 – was originally built in England by Tom Walkinshaw Racing in 1988 and air freighted to Bathurst to compete in that year’s race under the Holden Special Vehicles banner.

Driven by Tom Walkinshaw and Jeff Allam it only lasted a few laps in the race before the rear suspension collapsed.

It was rebuilt and returned to the track for the 1990 Sandown 500 driven by Percy and Neil Crompton, though brake problems eliminated it from the Melbourne classic.

Percy teamed with Grice to claim the HRT’s first Bathurst win in late September 1990, out-running the turbo cars to claim a popular victory in the debut full-time year of HRT set up under Percy via TWR.

The car raced once more at the Adelaide Grand Prix meeting in 1990 before it was sent to England as part of TWR’s car collection.

It returned to Australia in the early 2000s as TWR collapsed and has been held by Holden Special Vehicles and displayed in HSV reception on occasion.

It made the trip to Bathurst in 2010as part of the team’s special 20th anniversary celebrations in the year the team ran a 1990 retro livery.

Originally debuted by Tander at Symmons Plains in 2010, chassis WR 014achieved its day of glory at Mount Panorama when Tander held off a fast-finishing Craig Lowndes to win by just 0.2917s, the closest real ‘racing’ finish in the history of the race.

It also made Percat the first rookie winner of the race since Jacky Ickx won with Allan Moffat in 1977.

Tander last raced it in 2012 before it was restored to its 2011 livery and retained by HSV.