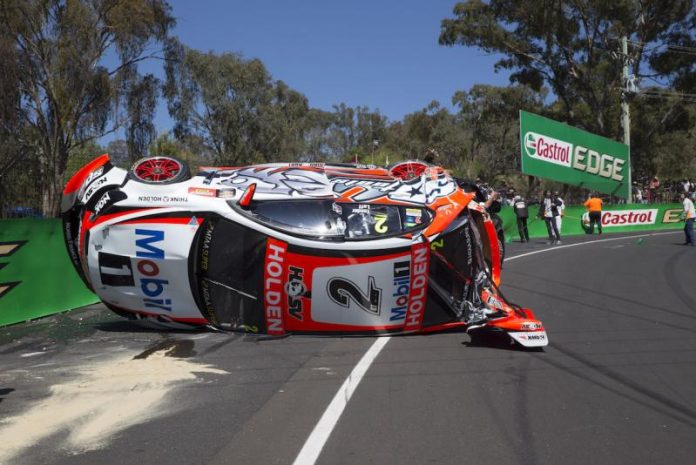 THE Holden Racing Team will bring a Bathurst wreck back from the dead this weekend at Sydney Motorsport Park.

The VF Commodore crashed and rolled onto its side in Saturday practice at Mount Panorama by Warren Luff last year will return to active duty in Garth Tander’s hands at this weekend’s SuperSprint round.

The Walkinshaw Racing-built car was badly damaged when Luff cannoned into the innocent Red Bull Commodore of Craig Lowndes at Griffins Bend after brake failure sent him on a wild ride.

Such was the damage that Tander and Luff were forced to withdraw from the rest of the weekend and sat as spectators for the race on Sunday.

Ironically, it’s 12 months since the chassis – the latest Car of the Future machine debuted by the team – had its racing debut in Garth Tander’s hands at the same Sydney venue where it’s making its racing return.

It only managed to race in Sydney and finish third at the Sandown 500 last year before it was sent to the sidelines after the Bathurst crash.

“I had a run in it at a ride day at Norwell on the Monday and Tuesday straight after Queensland Raceway,” Tander told V8 Sleuth today.

“The boys got a fair bit of work done last year on it but all of the running gear that was left went into the car I have been racing since. So there wasn’t much left of it and basically the Bathurst car has been basically a completely new build.”

Tander had been driving Walkinshaw Racing’s original CoTF chassis since the Gold Coast last year. It will now revert to becoming a spare for the four-car WR squad.