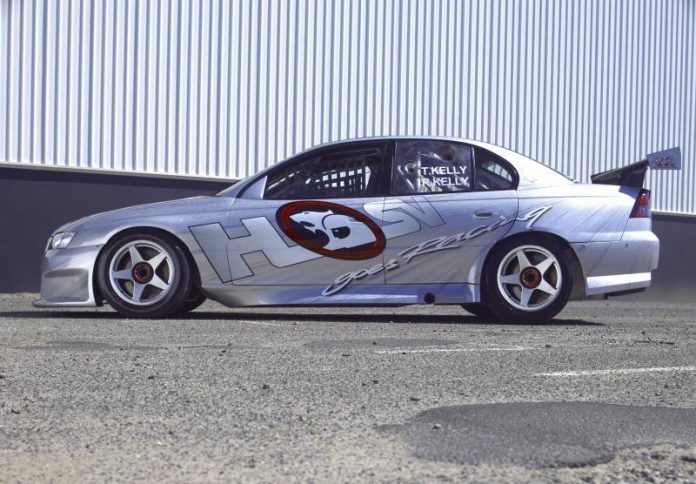 Remember the silver bullet Commodore wheeled out in the mid 2000s? It’s making a return to the track this weekend …

MANY V8 Supercar teams have built dedicated ride cars in previous years, but in 2005 brothers Todd and Rick Kelly helped put together an ex-race car for Holden Special Vehicles to fill the role.

Dubbed ‘K2’, it was later repainted in HRT and HSV Dealer Team colours and gave plenty of fans and special guests rides on tracks around the country.

Now it’s making a racing return on the east coast in this weekend’s round of the Kumho Tyres Australian V8 Touring Car Series at Queensland Raceway.

Rookie driver Brendan Strong will be a new face on the grid and will pilot the ex-K2 ride car in his debut in the Kumho Series.

The 23-year-old from Terranorra (on the New South Wales side of the Queensland border) will make his debut in the category, which is a headline class of the Shannons Nationals and features ex-V8 Supercar Ford Falcons and Holden Commodores.

He and his family-run team have sourced theHolden Commodore VZ from Western Australia for their first foray into the Kumho Series.

Strong won last year’s Queensland Production Sports Car championship in a Mazda MX5 and finished runner-up in the series the year prior.

“I started racing in karts at age seven and I went over to New Zealand at age 13 and bought a Honda CRX and raced in the sports car class until I was 16,” says Strong.

“Then we came back to Australia and we built up our own MX5 Mazda and we’ve been running it for the last two and a half years before buying the V8 earlier this year.”

Strong’s Commodore was originally built by the Lansvale Racing Team in 2001 and raced by Cameron McConville before becoming the team’s spare car.

Jason Richards raced it in 2004 for Tasman Motorsport before it was rebuilt and evolved into the HSV K2 ride car.

The VZ model Commodore has raced in Western Australia for the last five years in Sports Sedans before being purchased by Strong Motorsport.

“I’m pretty pumped up to get in and have a drive,” says Strong.

“We haven’t had a chance to test yet. The car was damaged in the container on the way back from Perth so we’ve had to get a bit of panel damage fixed. I’ve been busy with work myself so we’re planning to get out on Wednesday for a run before the round on the weekend.”

Beyond his debut this weekend at Queensland Raceway, Strong intends to compete – finances permitting – in the remaining rounds of the Kumho Series at Phillip Island, Wakefield Park and Sydney Motorsport Park.