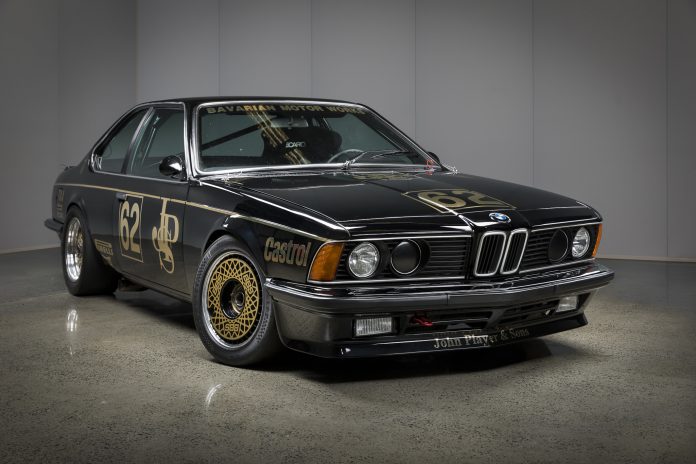 JIM Richards is a superstar in the history books of Australian motorsport and his 1985 Australian Touring Car Championship-winning JPS BMW 635 CSi Group A machine remains one of the most significant cars in his career.

Now that very car has just been placed on the market here in the V8 Sleuth Online Showroom.

The German thoroughbred is a very special car in Australian touring car history, achieving the amazing feat of claiming a trio of titles in 1985 – the Australian Touring Car Championship, Australian Endurance Championship and AMSCAR Series crown.

The JPS BMW team run by the late Frank Gardner in Sydney produced some of the most memorable cars in Aussie motorsport history – and this is no doubt top of the pile.

The car now for sale was Richards’ #62 car in the 1985 ATCC, beginning with victory at Winton before claiming another six wins at Wanneroo, Adelaide International Raceway, Calder (above), Surfers Paradise, Lakeside and Amaroo to claim the expat Kiwi’s first Australian Touring Car Championship crown.

Along the way the black and gold machine also won rounds in Amaroo’s AMSCAR touring car series before it was renumbered #1 given Richards was the ATCC victor.

In those days a separate endurance championship was held after the sprints that made up the ATCC.

The change in format didn’t do much to stop the wins as Richards won a 300-kilometre race at Amaroo, a 250-kilometre race at Oran Park and he and Tony Longhurst won the Castrol 500 at Sandown (despite stopping on the back straight with a relay problem at one stage and dropping to 27th place!)

The duo then went to Bathurst to tackle the might of Tom Walkinshaw’s invading Jaguars – they were running well until both JPS BMWs slipped off the track on oil into the sand trap at Hell Corner. This remains a moment in Bathurst history that many fans talk about to this very day!

Richards got going again and recovered to finish fourth before going on to win the final enduro round at Surfers Paradise, even after a rainstorm caused a red flag and restart.

Now this piece of Aussie touring car history is on the market for the first time in over a decade.

After Richards’ 1985 success, the car was sold to Garry Rogers at the start of 1986, however Jim’s new replacement car wasn’t quite ready so he drove this ‘85 car to second place in the opening round at Amaroo and sixth place at Symmons Plains.

Rogers took over the car for the next AMSCAR round at Amaroo and it was repainted in orange Bob Jane T-Marts colours – the long-time Supercars team owner crashed it in qualifying at Oran Park.

Post repairs it was sold to privateer Joe Sommariva and competed in various touring car events for a few years before being bought by none other than Richards in 1990.

A few further owners had the car for a time until current owner Adrian Brady purchased the BMW in 2006.

“The car was in quite poor condition and was stripped for a total nut and bolt restoration which took two and a half years,” he says.

“The shell was found to be twisted from previous accidents and the roll cage was made with exhaust pipe tubing. All was corrected and the mechanicals were rebuilt with all new plumbing, electrics and safety equipment. A new Fuel Safe fuel cell was made to order to fit the existing tub and fittings. The car has been used occasionally in Heritage Touring Car events since 2009.”

The JPS BMW comes with a large spares package and would make the perfect car for the Historic racer or collector.

Click here for further information on this car in the V8 Sleuth Online Showroom.