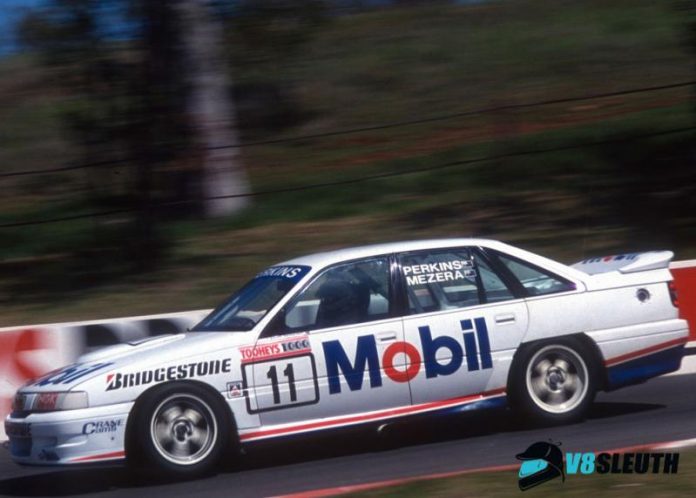 BIANTE Model Cars has been working long and hard on its VN Commodore SS Group A model race cars with a range of hurdles overcome to bring these models to market.

Now it has announced as part of its August announcement of models that the 1:18th scale version of the #11 Mobil 1 Racing VN Commodore from the 1991 Tooheys 1000 at Bathurst, driven by Larry Perkins and Tomas Mezera, is now available to pre-order at local die-cast model stockists and will be available to purchase on the Biante website when it arrives.

1991 was a year of celebration for Holden fans as Peter Brock come out of exile and recommenced his racing career with the General.

But it was a double celebration for ‘red car’ fans as he reunited with three-time Bathurst winning co-driver Larry Perkins – the duo had won The Great Race three times in a row from 1982 to 1984.

While Mobil 1 Racing may have had all the hallmarks of a Brock operation it was actually Perkins Engineering under the skin.

Mobil 1 Racing was slow to gain a foothold in the early rounds of the Australian Touring Car Championship, not helped by the delay in supply of new Bridgestone tyres. The team was forced to run on customer Dunlop tyres in the early stages of the season, not a promising option versus HRT’s factory Dunlop rubber.

The team started to gain traction towards the end of the year once the first of Perkins’ full-1991-spec V8 engines came on line and Bridgestone’s tyre supply issues were sorted.

Brock was able to qualify on the front row at both the Lakeside and Oran Park rounds despite hot competition from the Nissan GT-Rs and Ford Sierras.

True to form Perkins didn’t appear overly interested in results in the ATCC, many believing he used the championship merely as an elongated test session to knock the new VNs into line for the race he was very interested in – the 1991 Tooheys 1000 at Bathurst.

Rather than pair the ‘dream team’ of Brock and Perkins for Bathurst, the Mobil team elected to split them across their entries and Perkins selected Tomas Mezera as his partner.

The expat Czech had shared Commodores with Perkins for the previous two years at Bathurst so was a logical choice to share car #11.

This was the first time Holden teams took the new VN to Bathurst after three years in the fuel-injected ‘Walkinshaw’ VL and the learning curve was steep.

Early in practice officials deemed the #11 Commodore too loud. Perkins was forced to change to a quieter exhaust system and spent much of the remainder of practice tuning the handling of the new car to the track.

By the end of Thursday’s running the Perkins car was well established in the top 10 on the timesheets.

Perkins was the fastest Commodore in qualifying at Bathurst in 1991 with a time of 2m16.2s, quicker than teammate Brock and more importantly quicker than both of the factory Holden Racing Team cars.

Despite this qualifying speed, Perkins still had his eyes on the prize and ran his race engine in the Top 10 Shootout. The result was eighth position on the grid with a time of 2m17.02s.

On race day Perkins didn’t make the best of starts but once the early pace settled down he moved into seventh place behind teammate Brock – but an intermittent engine misfire began to develop.

Perkins pitted for tyres and fuel on lap 33 and handed the car to Mezera, who pushed up to fifth position before disaster struck.

The 1988 race winner returned to the pit lane on lap 65, ominously rolling up pit lane with the engine already shut down. An early radio failure meant the team had no warning of an issue with the #11 Commodore, so Mezera’s appearance on the pit lane was a surprise to them.

The misfire had degenerated into a dropped valve, likely a result of the free rev-limit allowed as part of the 1991 regulations.

The Perkins/Mezera VN Commodore was pushed to the rear of the pits, its race over.

Brock and Perkins competed together twice more in 1991 – in separate cars at the Adelaide Grand Prix meeting and together in the Nissan-Mobil 500 races at Wellington and Pukekohe in New Zealand – though their partnership ended once the season finished and they again went their separate ways.