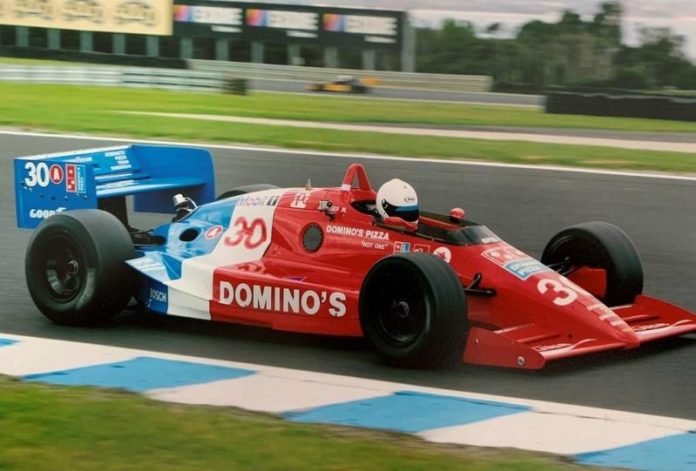 AN ex-Al Unser Jr race-winning Indycar is set for a public return at this weekend’s Warwick 1000 event at Queensland’s Morgan Park Raceway with the history-making car set to be a star attraction.

Campaigned by Unser Jr throughout the 1986 CART season in the famous Domino’s Pizza livery for Doug Shierson Racing, the Lola T8600 Cosworth won the season-ending Nissan Indy Challenge in Miami from 19th on the grid, the lowest starting position to win on a road or street circuit in series history to that point.

The result gave the second-generation racer fourth in the series standings, claiming a total season purse of US$628,898.

The chassis, T8600-07, started the year at the second round on the streets of Long Beach with second place kicking off a run of six straight podiums at the seaside venue for Unser Jr, including four wins from 1988-’91, and ultimately six victories though to 1995.

The car then carried Unser Jr to fifth in the Indianapolis 500, before being relegated to backup status for Milwaukee.

At Portland the team finished third, then ninth at Meadowlands, eight in Cleveland, fourth in Toronto, eighth in the Michigan 500, before a major repair saw the car return to Lola, while it was the designated spare at Pocono.

Back in service at Mid Ohio, the car finished fifth, before sitting out Sanair and Michigan, before registering 11th at Elkhart Lake, 23rd at Laguna Seca, then returning to a backup role at Phoenix.

For pole-sitter Guerrero, low fuel robbed him of the win after leading every one of the opening 111 laps.

Despite running caution free, 13 of the 27 cars failed to finish the race, with only the top pair completing the full 200-mile journey.

The car remained in the possession of Shierson Racing until 1999, before moving through a trio of owners, finally landing on Australian shores in 2009.

Log booked as an Historic Group R racer, the Indycar is set to feature on-track each day over the event in solo demonstration runs.

The inaugural Warwick 1000, in recognition 1000km of qualifying and racing between the nine competing categories over the race weekend, has a 160 car entry list catering to every taste in motorsport.

The event doubles as the third round of the 2019 CAMS Queensland Circuit Racing State Championship.

A new generation of stars will be looking to make an impression in the Circuit Excels, with youngsters Jett Johnson (son of Steven) and Nash Morris (son of Paul) out to prove a point against a highly experienced field.

Big fields of Production Touring Cars and Improved Production races have tin top fans covered, while a strong entry from the Production Sports Cars will see Porsches line up against Ginettas, a Mosler, as well as a competitive field of Mazda MX5s, amongst others.

The pocket rocket Superkarts will be joined by classic Historic Touring Cars, Sports Sedans and Trans Ams, Gemini, Saloon Cars and HQ Holdens, while the open wheel set will be catered for with a field of Racing Cars, Formula Fords and Formula Vees.

A highlight of the build up to the event has been the Water for Warwick drive, with the local motorsport scene raising funds for close to six pallets of water, which will be distributed to the local drought-stricken community.

Entry for kids up to 16 years of age is free, with Saturday admission $10, Sunday $15, while weekend passes are $20, with on-track action commencing at 8am on both days.

Further information on the Warwick 1000 is available here.