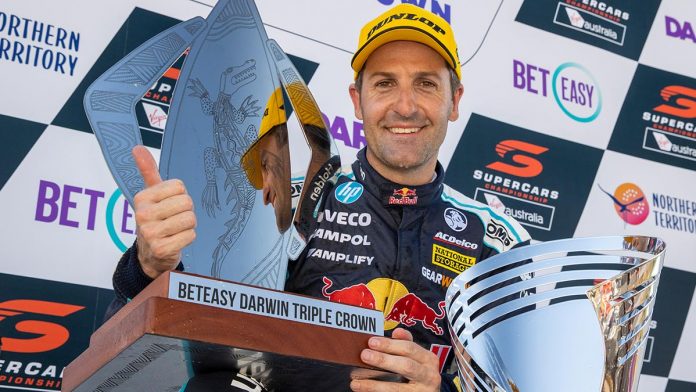 The 37-year-old today confirmed the news as part of a multi-tiered announcement relating to a change of ownership of Triple Eight Race Engineering.

Whincup, who has won a record seven Supercars Championship crowns and a record 122 championship races, will use the remainder of this year to best prepare for his new role with the team in 2022.

He will drive the #88 Red Bull Ampol Racing Commodore ZB as teammate to Shane van Gisbergen in this year’s championship, his 18th full-time season in the championship and 16th with Triple Eight Race Engineering.

The four-time Bathurst 1000 winner (who turns 38 this Saturday) will make his last appearance as a full-time Supercars driver at December’s Gold Coast 500 before replacing Roland Dane as Managing Director and Team Principal of Triple Eight Race Engineering in 2022.

He will evaluate the option of driving for the team as an endurance co-driver in 2022.

“I’ve always said that after I retire from full-time driving, I want to keep going racing and in 2018 I made the commitment for that to be with Triple Eight by becoming a shareholder,” Whincup said today in a release issued by the team.

“I’m honoured that Roland trusts me to lead the family that he’s built here in Australia.

“I’ll certainly maximise every opportunity this year and beyond to learn from him and I’m grateful that he will still be dedicating a portion of his time in 2022 to ensuring the team and I have the best opportunity for success.

“I have to thank everyone who has supported me during my driving career – family, friends, fans and partners.

“I’ll be giving my all to making sure we deliver the best results possible in 2021.”

Whincup, who bought into Triple Eight in 2018, has also increased his shareholding from 15% to 19%.

Whincup has ascended to become statistically the greatest driver in the history of the championship since debuting with Triple Eight in 2006 and debuting in the championship at Queensland Raceway with Garry Rogers Motorsport in 2002.