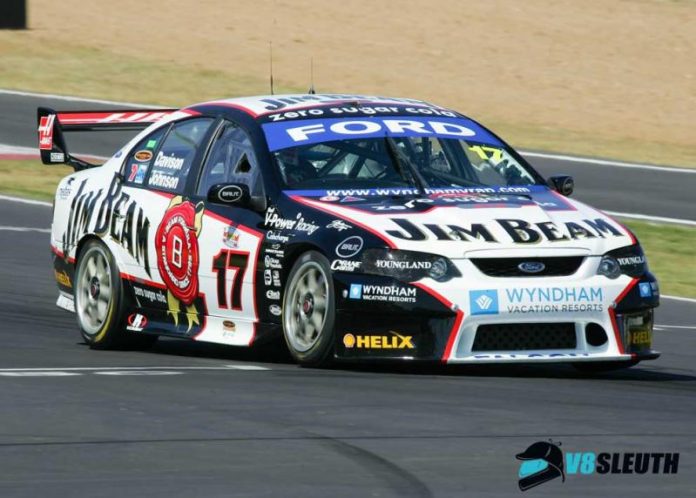 THE CAR that scored Dick Johnson Racing’s last Bathurst 1000 podium prior to the 2017 race will make a racing return in the Kumho Tyre V8 Touring Car Series in Sydney next week.

Now owned by Jason Foley, DJR BA16 was originally built as a BA Falcon by the Queensland team in 2004 however is perhaps most famous for its involvement in the dramatic conclusion to the 2007 Bathurst classic, where Steven Johnson and Triple Eight’s Craig Lowndes battled for the lead in wet conditions.

The 2007 podium performance by Johnson and co-driver Will Davison came amidst tough times for the iconic Queensland squad, with the 10-year drought between podium visits only broken this year when Fabian Coulthard and Tony D’Alberto finished third for DJR Team Penske two weeks ago.

Foley purchased the car earlier this year and will enter it into the Kumho Series for the first time when the 2017 title decider is held at the Australian Muscle Car Masters event at Sydney Motorsport Park.

The car retains its 2007 Jim Beam livery as raced at the Bathurst 1000 and the end of that year’s V8 Supercar Championship Series.

Steven Johnson raced the car for the majority of its history in the V8 Supercars Championship prior to Grant Denyer taking over the car for his tilt at the 2009 Fujitsu Series, where it was a race winner.

The car was restored to its Bathurst livery in 2012 and has remained in the hands of private collectors since.

Foley will be one of several Kumho cars sporting either original or tribute liveries when the series returns to the Muscle Car Masters event next week.

The two-car Pollicina Motorsport outfit present their ex-Tasman Motorsport VE Commodores in tribute liveries to the way the cars were presented in 2008/09, as does Chris Smerdon with his ex-IRWIN Racing/Stone Brothers FG Falcon.

The Kumho Series will stage three races across the popular Australian Muscle Car Masters event next weekend (October 27-29) with the action to be streamed live (details to be advised).

A full entry list for the title decider – which has Brad Jones Racing driver Jack Smith leading the championship – will be released early next week.