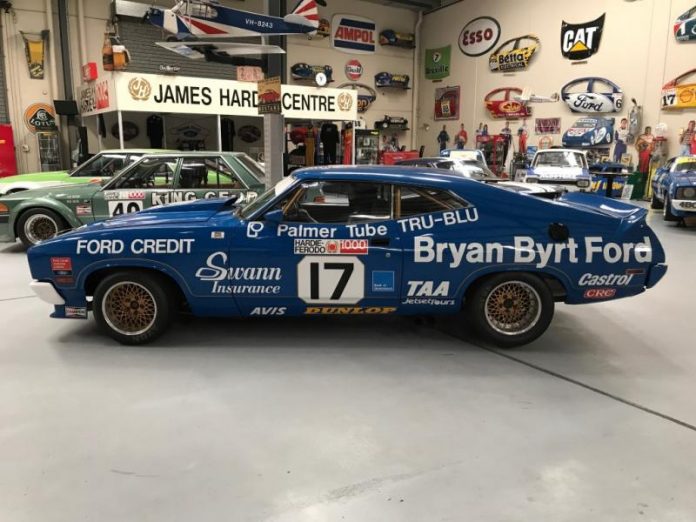 ANY Dick Johnson race car is bound to get plenty of interest and this week it’s been his 1978/1979 Bryan Byrt Ford Falcon XC Hardtop Bathurst car that has plenty of people bidding up a storm!

The car, part of John and Craig Harris’ Queensland-based car collection for some years, was in fact the car Dick drove prior to the famous ‘rock’ Bathurst XD Falcon in 1980, and is currently being auctioned live online by Lloyds Auctioneers and Valuers.

The Bryan Byrt XCcar comes race ready and includes original and current CAMS logbook and also comes with Johnson’s race suit and helmet of the period.

Built up for Johnson in 1978 after he’d written off a Falcon at Oran Park, this car was driven by Johnson and Vern Schuppan to fifth place in the ’78 Hardie-Ferodo 1000 at Bathurst, while Johnson and Gary Scott failed to finish the ’79 race, retiring in the fence at the top of the Mountain with just 24 laps complete.

The V8 Sleuth spoke with John Harris (who worked at Bryan Byrt Ford from 1971 as a partner before buying it outright) about the car a few years back for Australian Muscle Car Magazine and he recounted the situation at the end of the ’78 season when the dealer-run team sleeved back its racing program.

“At the start of 1979 Ford asked me to stay involved in racing,” he recalled.

“The cars looked the part and I agreed to keep one. I had bought the dealership from Bryan’s estate and was pretty much hocked up to my ears. But I agreed to keep one car and gave Dick the option of which one to keep – and that was #17, the newest car.”

Johnson drove it during the ’79 season but come the end of the year Harris decided that Bryan Byrt Ford simply couldn’t continue backing racing at the same level.

“I didn’t want to go running in 1980, I needed to put more time and effort into the dealership so I did a deal with Dick – I’d stay as a sponsor for 18 months and I gave him all the running gear, tyres, motors, everything we had.”

Part of the deal too was the #17 XC Hardtop, which then helped form the basis of his 1980 ‘Bathurst Rock’ Tru-Blu XD Falcon.

Johnson purchased a road going XD (an ex-police car) and built up the XD out of the race bits from the XC, including engine and transmission.

Of course, what happened at Bathurst 1980 is part of Australian racing folklore as Johnson ploughed into an errant rock on the track while leading and TV viewers Australia-wide dug into their wallets to help him back onto the track.

But while the focus was on the XD in October 1980, the #17 XC would re-surface when Harris Snr began his hunt for old cars.

“I found it in a paddock in the back of Laidley in Queensland with a tree growing through the empty engine bay! We dragged it back to Brisbane and spent up to eight months restoring it back to its normal old self.

“That car needed way more work than the #32 one. There was a huge amount of rust in it. The owner I bought it off had purchased it from another owner that had pulled it apart to restore it, but never got it back together.”

We’ll see what unfolds with the auction of this car!