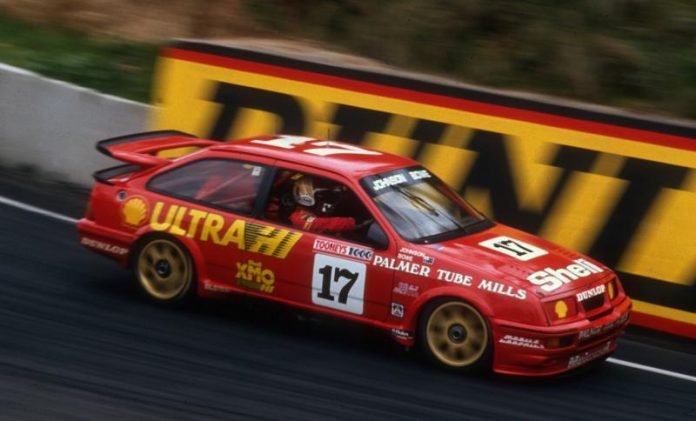 DICK Johnson is a legendary name when it comes to the history of motorsport at Mount Panorama so it’s appropriate one of his former team cars is part of this year’s Bicentential Display at this October’s Supercheap Auto Bathurst 1000.

One of his four-cylinder, turbo-charged Ford Sierra RS500 Cosworths will join the line-up of cars and bikes on display to celebrate the rich racing heritage and history of Bathurst.

The actual car that will be displayed at Bathurst is the sixth and last of the Sierras built by Johnson’s Queensland-based team from the unique international Group A touring car era.

In 1990 it was driven at Bathurst by Johnson and John Bowe and qualified on the front row of the grid but blew a turbo on lap 94.

Bowe used this car as the #18 entry in the early rounds of the 1991 Australian Touring Car Championship before it became the team spare for the rest of the series.

It returned to action for the 1991 Tooheys 1000 at Bathurst, again as car #17 driven by Johnson and Bowe. It was running third and looking good for a podium finish but blew an engine on lap 123.

Johnson drove this DJR6 chassis as car #17 in the 1992 ATCC before competing for the final time at Bathurst that year as car #18 for Greg Crick and Terry Shiel, finishing 11th outright.

The car is now owned by Melbourne collector Chris Stillwell, who continues to race it in Historic competition in the Heritage Touring Cars category and in fact raced it at Bathurst this year at Easter.

The overall value of all machines in the display will be over $10 million, the perfect way to celebrate Bathurst’s Bicentennial this year.

Keep an eye on the V8 Supercars website, V8 Sleuth website and our respective social media channels in upcoming weeks for further confirmations of cars and bikes that will be part of the Bathurst Bicentennial display this October.