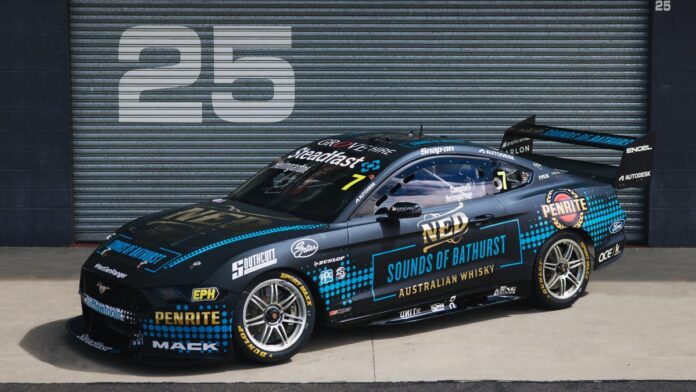 KELLY Grove Racing’s Andre Heimgartner/Matt Campbell Mustang will run a new livery at the Repco Bathurst 1000, as part of a unique promotion from sponsor NED Whisky.

The car will sport ‘Sounds of Bathurst’ branding to promote a limited-edition whisky line created with involvement from the Supercars team.

“Working in collaboration with NED Whisky, we have taken a new approach to whisky maturation, producing one of the most unique and powerful whiskies ever made,” a KGR statement explained.

“We applied a recording of André Heimgartner’s hot lap of Mount Panorama, Bathurst from early 2021 to our reserve grade NED Australian Whisky to sound age it.

“Blasting the barrels for over 50 hours per week with the intense vibrations of a V8 Mustang has resulted in one of the most unique and powerful whiskies we’ve ever made.

“This is a very limited batch with only 1743 bottles produced. Two designs have been developed for the Sounds of Bathurst bottle, inspired by Kelly Grove’s race cars #7 and #26.”

Sebastian Reaburn, Head Distiller, NED Whisky, added: “We knew that sound would accelerate ageing, there have been numerous experiments around the world with music.

“We were not expecting the intensity of the engine noise to drive so much change, so fast.

“The intense, full spectrum of sound waves from the Kelly Grove Mustang GT engine is the reason! This is the best whisky we have made so far”.

KGR is running new liveries on both of its cars at Bathurst, having on Monday unveiled an Australian-themed Penrite scheme for its David Reynolds/Luke Youlden entry.

Listen to the V8 Sleuth team wrap all the Tuesday action from trackside at Mount Panorama in the player below!


The next-generation Ranger is the smartest, most capable and most versatile Ranger ever – developed at every step with our customers’ needs and experiences in mind.