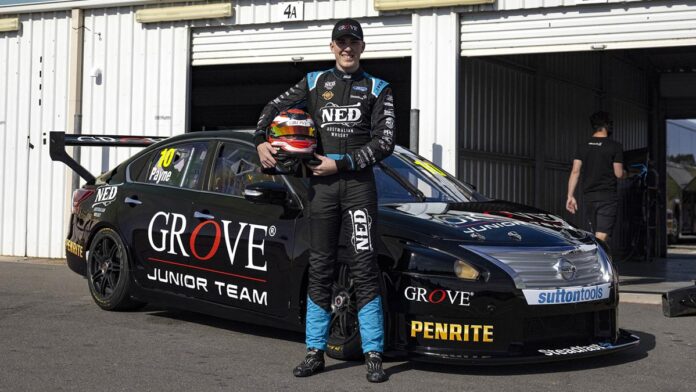 KELLY Grove Racing has dusted off a Nissan Altima for young gun Matt Payne to have his first Supercar laps at Winton Motor Raceway today.

The 18-year-old Kiwi was recently announced as part of the Grove Junior Team program and could be thrown straight into the Supercars Championship by the team as soon as next year.

In order to fill the role to be vacated by Brad Jones Racing-bound Andre Heimgartner, Payne will need a Superlicence dispensation.

Part of KGR’s efforts to fast-track the Carrera Cup Australia driver’s development is an intention to field the youngster in the Super2 Series this year.

“I really can’t wait to drive this car at Winton today,” said Payne ahead of Evaluation Day, where he is being mentored by Brenton Grove.

“It has always been a dream of mine to race in Supercars, so today is the first opportunity to see what it’s like.

“I can’t thank Stephen and Brenton Grove enough for not only this evaluation day, but for giving me the chance in the new Grove Junior Team.

“It’s a very exciting time and I’m looking forward to rewarding their faith in me.”

The Altima Payne is driving is the second Nissan built by Kelly Racing, dubbed KR002.

It was Rick Kelly’s Jack Daniel’s Racing Altima from 2013-15 and was later raced by Simona De Silvestro in the ‘16 Bathurst 1000 (joined by Renee Gracie) and ‘17 Supercars Championship.

It’s not been raced since the end of the 2017 season but was driven by Australian Formula 1 star Daniel Ricciardo during a Castrol promotion at Calder Park in ‘19.

The car is now owned by private collector Stuart Eustice but remains housed at the KGR workshop in Braeside, Melbourne.