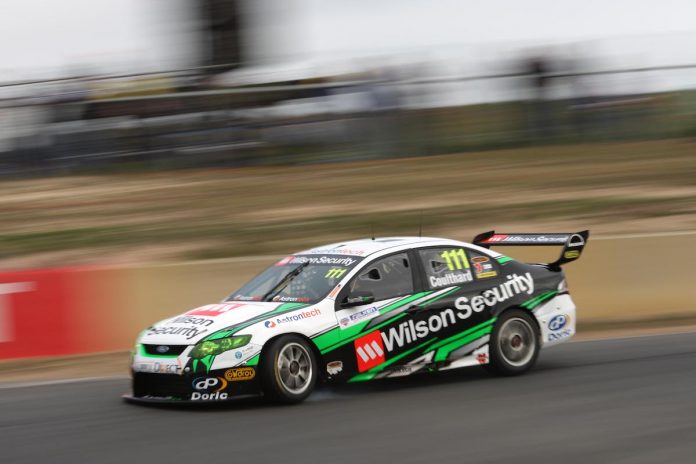 THE Triple Eight-built Falcon FG that Kiwi ace Fabian Coulthard took to his maiden Supercars Championship podium finish in Tasmania in 2009 is set to be restored.

But its new owner, himself a Kiwi, won’t be returning it to the #111 Wilson Security Racing livery that Coulthard raced it in!

V8 Supercar enthusiast Richard Atkinson – already the owner of a former Brad Jones Racing Ozemail Falcon – has purchased the car (chassis 888A-017) from its current owner in Queensland and will ship it to New Zealand on the other side of the current COVID-19 pandemic.

He will instead return the car to its 2012 Jim Beam Racing livery as it carried in the hands of Dean Fiore, who ran as part of a four-car Dick Johnson Racing operation that season alongside Steven Johnson, Steve Owen and James Moffat.

The car, one nearly 50 cars run out of the DJR/DJRTP workshop over the years, is one of 50 cars featured in a new limited edition, 400 page collector’s hardcover book documenting the racing history of every DJR/DJR Team Penske race car.

ORDER HERE: The new book, to be released in May/June, is available to order here.

“I’ve collected all of the bits to put it back together,” Atkinson said this week.

“I’ve got a proper DJR engine for the car and it’s ready to be shipped the other side of the current situation in the world.“It will be a huge project, one that I’m really looking forward to.

“I’ve always wanted a Triple Eight Ford and this one is quite special given it did a wee stint at DJR. And it’s chassis 017 too, so that’s the right sort of number in relation to DJR after all!”

The car was built new among a batch of Triple Eight Falcon FGs for the start of the 2009 season and run by Paul Cruickshank Racing with Coulthard at the wheel for the full year.

The current Shell V-Power Racing Team ace finished third in the Sunday race at Symmons Plains in 2009 behind Jamie Whincup and Will Davison, his first of 56 career podiums in the Supercars Championship.

Jacobson drove it for Sonic Motor Racing in the Dunlop Series in 2013, while De Silvestro had her very first taste of a Supercar at a Queensland Raceway test in 2015 in the car (when it was her Harvey Norman Supergirls co-driver Renee Gracie’s regular Fujitsu-backed Dunlop Series machine) ahead of making her debut as a wildcard in that year’s Supercheap Auto Bathurst 1000.

Gracie raced it in 2015 and 2016 before Smith made his Dunlop Series debut in the car at Bathurst in October 2016. The young Gold Coaster crashed heavily at the Dipper, causing damage to the car that has seen it sidelined from the track ever since.