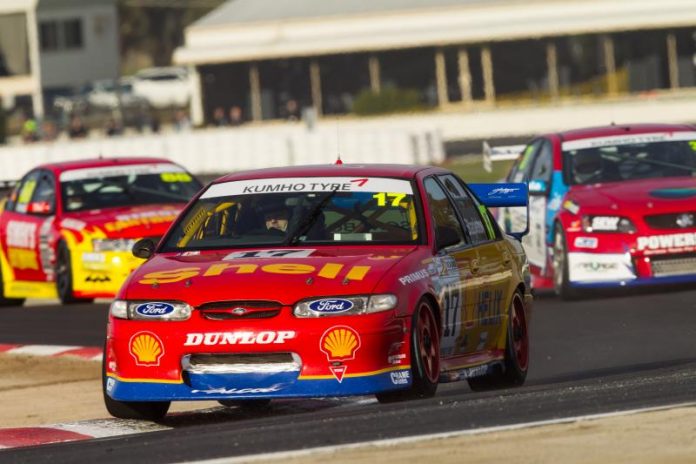 THE KUMHO TYRE Australian V8 Touring Cars all-new Heritage Class could be set for a big season in 2017, at least if early interest is anything to go by.

While still remaining eligible for outright/Kumho Cup points, entrants running models up to and including Holden VX Commodore or Ford’s AU Falcon in the Kumho Series will be eligible for the Heritage Class this year.

Heritage Class entrants will be encouraged to run their vehicles in their original livery, with a trophy awarded to the best heritage livery on track next season.

Already Troy Stapleton, who owns and races an ex-Dick Johnson Racing EL Falcon, is working to contest all five rounds of the 2017 series for the first time.

One of the most popular additions to the Kumho Series grid last season, Stapelton’s Falcon runs in period Shell Helix livery and was a firm fan favourite at rounds he competed in 2016.

Meanwhile, newcomer Bradley Neill has entered his VS Commodore – one with a unique history.

His car was built by Larry Perkins for well-known V8 privateer David ‘Truckie’ Parsons in 1996. After Parsons contested the ’96 Australian Touring Car Championship, the car was sold to Ballarat privateer Robert Smith – whose team ran the car at Bathurst for the next two seasons.

The car has been through the hands of several since before Neill, who hails from Toowoomba, acquired it in early 2016. The 1996 Parsons Transport livery was re-applied to the car for its first appearance at the Muscle Car Masters in October 2016.

Andy Cantrell’s ex-Glenn Seton Racing Ford Falcon EL is another expected to join the Heritage class for selected rounds in 2017.

The Ford Credit-liveried car was the last car built by Glenn Seton Racing and was re-united with former driver Neil Crompton at last year’s Kumho series round at Queensland Raceway – the racer turned commentator filming a piece with the car for inclusion within FOX Sports’ coverage.

More additions to the Heritage Class are expected prior to the opening round of the Kumho Series, to be held at the Phillip Island Grand Prix circuit on April 21-23.