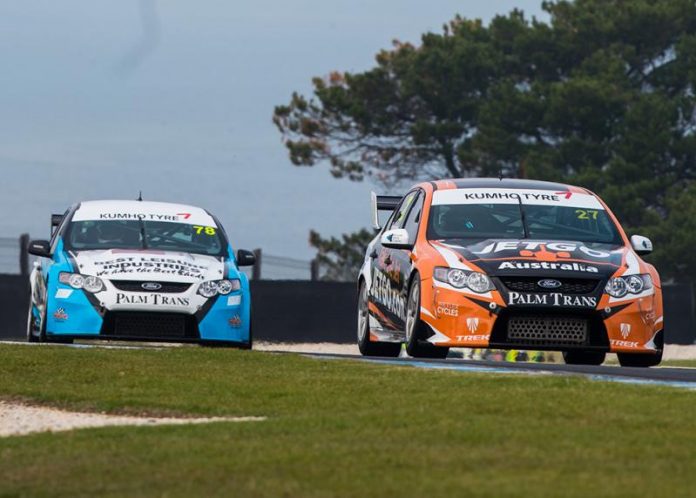 THE two youngsters fighting for the Kumho Tyre V8 Touring Cars Series crown next weekend at The Bend Motorsport Park have both signalled their intentions to step into the Dunlop Super2 Series for season 2019.

MW Motorsport teammates Tyler Everingham and Zak Best will head into the series finale separated by nine points with both drivers looking to use their Kumho success to graduate to the second-tier series next season.

Everingham, who currently leads the pointscore, looks set to undertake an evaluation day in one of MW Motorsport’s Nissan Altimas.

“We are going to head out and test one of Matt’s Nissans at some point in the near future,” Everingham told V8 Sleuth.

“Ideally we would like to continue with Matt for Super2, depending on the evaluation and getting a deal together.”

The 17-year-old has enjoyed a strong season in his debut Kumho Series year, scoring a pole and round win at Sydney Motorsport Park, five individual race wins and four podiums, putting the Dubbo-based youngster in prime position heading into the final round.

His teammate Best has also enjoyed a positive year taking pole and round victory in the series’ last hit-out at Queensland Raceway plus two race wins.

The Benalla local is also pushing for a Super2 start in 2019, but says he won’t be thinking about it come next weekend.

“The obvious thing is to try and get into the Super2 series and ideally it would be great to stay with Matt due to his Nissan program,” said the 17-year-old.

“The only thing holding us back is budget and the available seats, but I haven’t really thought about it too much yet.”

Both Everingham and Best took to The Bend Motorsport Park today for a test day alongside a range of other Kumho Series teams.

The wildcard of the weekend is the return of defending Kumho Series champion, and current Super2 driver, Jack Smith, who will jump aboard his Brad Jones Racing Commodore to complete his part-time Kumho Series campaign.

Smith dominated the early part of the season by winning the first two rounds at Phillip Island and Winton but has not competed in the last two at Sydney Motorsport Park and Queensland Raceway, opening the door to the pair of young guns to fight for the title.

“Having Jack back could be a good thing or a bad thing, he’s been the benchmark for outright speed this season,” said Best.

“But the main goal is to finish in front of Tyler and the rest will take care of itself.”

There will be 143 points on offer at The Bend (three for pole, 40 for Race 1, 40 for Race 2 and 60 for Race 3), meaning third-placed Jon McCorkindale is also in with a shot at the title given he sits 96 points off the lead as he looks to continue to develop his recently acquired FG Falcon.

V8 Sleuth is proud to again partner with the Kumho Tyre V8 Touring Car Series in 2018 – click here to view more information on the series including results, drivers, cars and more.