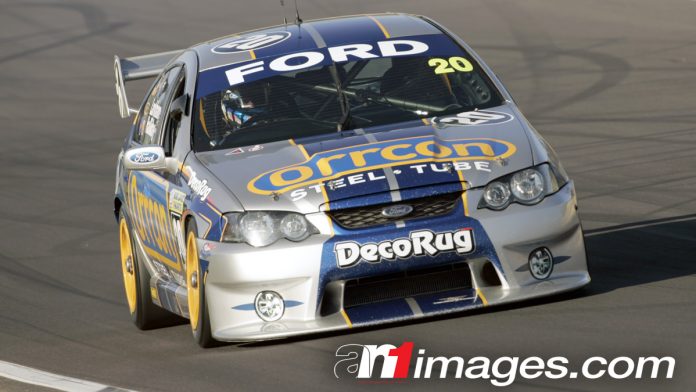 THE ORRCON Larkham Motorsport Falcon raced by Mark Winterbottom during his first two full-time seasons in the Supercars Championship has returned to the racetrack.

Tasmanian Ray Hislop has purchased the car and raced it in the Sports Sedans category last weekend at Sandown in the Victorian State Race Series and is entered to run in Super3 at Bathurst this weekend.

A field of 28 cars has entered for this weekend’s combined Dunlop Super2/Super3 Series round at Mount Panorama.

ENTRY LIST: A full run down of the drivers and teams competing in Super2/Super3 at Bathurst this weekend

The car hasn’t raced in Super3 since the category was known as V8 Touring Cars. In fact it has good history in that series given it finished runner-up in the points back in 2010 driven by Terry Wyhoon.

Most recently owned and driven by Russell Pilven, the car is now in the hands of Hislop, well known for his performances in an Improved Production V8 Falcon.

His ex-Larkham car is one of two BA Falcons the Queensland-team raced and was in fact the last car the team built prior to its closure at the end of 2005.

Winterbottom famously escaped injury driving this car in China in that same year when he hit a dislodged drain that tore a huge hole in the floor of the car.

The car was Winterbottom’s car the previous year but became team owner Mark Larkham’s last Bathurst 1000 car given he shared it with Kiwi Matt Halliday for that year’s Sandown and Bathurst endurance races.

Larko, of course, was to be ousted from his TV role for 2021 but was kept as part of the line-up after a huge backlash from fans via social media.

LARKO BACK ON TV: The Story of Mark Larkham’s TV Reinstatement