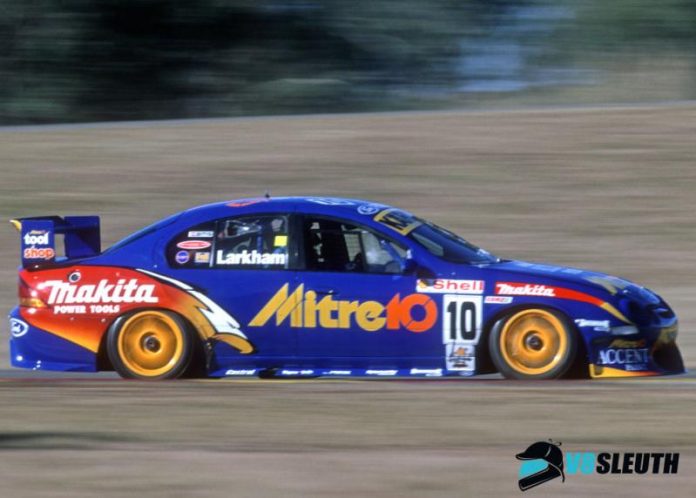 It’s the Mitre 10 Falcon that gave him a special Bathurst moment, but Mark Larkham will never get to see his pole-sitting Ford again …

SINCE retiring from driving and selling out of team ownership, Mark Larkham’s move into television broadcasting of Supercars racing has been a huge success.

He brought a new dimension to pit lane coverage during the Seven Network’s era as broadcaster of the V8 Supercars Championship and continues to analyse the sport in his role with RPM on Channel 10.

As a driver he achieved a great deal in open wheelers and touring cars but one of his best days in V8 Supercar racing came in November 1999 as he blasted to pole position in his Stone Brothers-run Mitre 10 Falcon AU.

Today Larkham has retained one of the team’s Falcons that he drove in that era, however the Bathurst pole-sitting car is sadly gone forever, destroyed in the colossal fireball crash involving Paul Morris on the grid at Oran Park in 2000.

This car was in fact the first Stone Brothers Racing Falcon AU built in 1999, however this car was given an M-TEK chassis designation by Larkham and his squad (which was run by SBR at the time) of M-TEK 02 rather than being tagged as SBR AU1.

This car was debuted by Larkham as the #10 Mitre 10 Falcon at the Albert Park non-championship event in 1999, which was its first on-track run (in Thursday practice) after being completed on the eve of the first V8 hit-out of the year.

Larkham drove it all season, including the enduros with Brad Jones as co-driver, and the former Formula Holden star put the car on pole position at Bathurst with a lap that to that point was the fastest-ever touring car lap of Mount Panorama.

The Mitre 10 team retained the M-TEK 02 chassis for the 2000 Shell Championship Series, though with a major difference.

After running out of the Stone Brothers workshop for the previous three years, Larkham established his own team under the ‘Larkham Motorsport’ banner.

He drove this car again through the first part of 2000 and it was also tested by Simon Wills in early March at Queensland Raceway as the team evaluated him for the enduros and a possible expansion to two cars in 2001.

Tim Leahey then tested the car in April and David Besnard got behind the wheel too before he eventually signed with Stone Brothers Racing. Kiwi Matt Halliday also spent some time behind the wheel.

Then the car was also used as a test bed by TEGA, running traction control at a Bridgestone tyre test at QR to investigate and log tell-tale signs of traction control in the MoTec system that would help them recognise it if it was illegally being used in the category.

Later in the year it was then badly damaged in the massive fireball accident at Oran Park with Paul Morris when the Big Kev Commodore stalled on the grid and an unsighted Larkham ploughed into him.

The chassis was scrapped but the salvagable running gear went into the replacement M-TEK 003 car that Larkham used soon after to claim a race win at Calder Park in Melbourne.

That very car is retained by Larkham in Queensland – the V8 Sleuth has been badgering him for years about restoring it or selling it off, so we’ll keep on his back in the New Year, we’d love to see it back in Mitre 10 colours one day!

But sadly the #10 Mitre 10 Falcon AU that gave Mark Larkham his most satisfying lap of Mount Panorama is gone, one of more than 20 cars from the V8 Supercars era to have been destroyed in active competition.