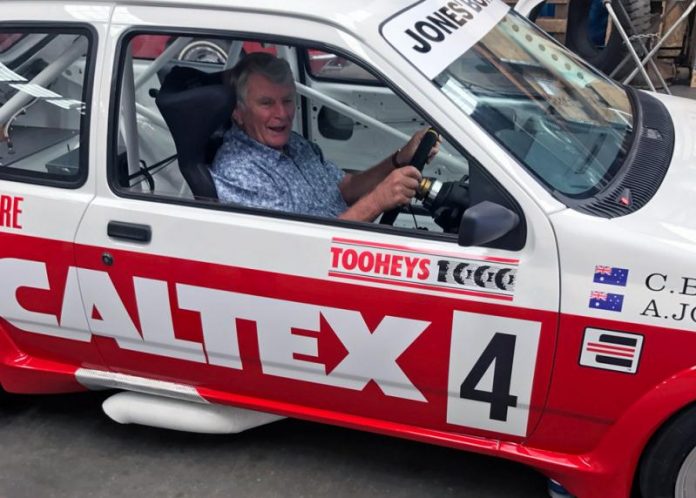 Bondy’s last winning car is heading back to the racetrack…

SUPERCARS Hall of Famer Colin Bond has been reunited with the car that delivered him the last championship race wins of his career.

A full restoration has just been completed on the Caltex-sponsored Ford Sierra RS500 that the legendary all-rounder piloted from 1988 to 1992.

Now owned by Chris Stillwell and restored by Euan McDonald’s Classic Motorsport in Melbourne, Bond was reunited with the carwhile in town for last weekend’s Formula 1 Australian Grand Prix.

TOP 5: V8 Sleuth rates the best of the Aussie Sierras

“It was a good car,” Bond told V8 Sleuth. “When the tyres were good, they were fantastic!

“But the tyres would go away after a while and the BMWs would give you a bit of a hurry-up!

“In their period they were the gun car to have. They were the ones you won the race with, so you had to have one.”

The car has been returned to its 1988 Tooheys 1000 livery where the car finished in third place, Bond co-driving with 1980 Formula 1 world champion Alan Jones to take what was Bond’s last and Jones’ first trip to the Bathurst 1000 podium.

Pictures of Bond’s Sierra and every other Ford that competed in the Bathurst 1000 can be found in our limited edition book Ford At Bathurst, The Cars: 1963-2018, the ultimate photographic history of the ‘blue oval’ at the Mount Panorama enduro.

After using a Sierra owned by John Giddings during the 1988 Australian Touring Car Championship and AMSCAR seasons, Bond debuted this car at Oran Park’s Pepsi 250 endurance race – the car was finished just in time to take up a place at the back of the grid!

This is the car Bond drove to the final two wins of his ATCC career, scoring upset triumphs at Lakeside and Mallala in 1990.

All up, the car made 81 touring car race starts across both championship and non-championship events from its Oran Park enduro debut through to the final Group A races on the support card at the 1992 Australian Grand Prix.

The car raced in Bond’s hands in all but one of those races: Bond debuted a brand new car at the 1992 Tooheys 1000 for he and John Smith, while this car was driven by Peter Hopwood and Terry Bosnjak.

The Sierra was then campaigned as a Sports Sedan during the 1990s, Peter O’Brien racing the car in largely Group A trim before replacing the turbo Ford motor with a mid-mounted Buick V6 Indycar engine.

The car came into Stillwell and McDonald’s hands “six or seven” years ago – in slightly unusual circumstances.

“The last restoration we did was the last Dick Johnson Sierra,” McDonald told V8 Sleuth.

“In the process of owning that we were looking for a bellhousing for that car. We basically found one and bought it – and they threw in the Bond car!

“The restoration had been started but the floor and plenum had been cut out of it (to fit the Buick V6). A genuine RS500 floor had been sourced to repair that, but we had to do all the repairs to the plenum and the floor.

“We basically had to dip the shell and then started the restoration with repairing the floor, tunnel and plenum.

“(Otherwise) it was a roller so it had all the original suspension, brakes, 9-inch diff. It was still in the sports sedan colours (with guard) flares on it, but had a YB Cosworth fitted back into it – not installed, just sitting in the chassis.”

The plan is for the carto returnto the racetrack this year with the Heritage Touring Car category.