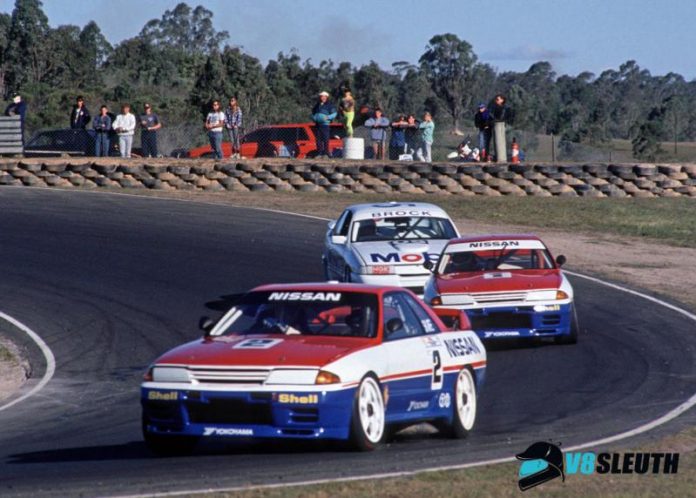 THE latest Seven Sport Magic Moments of Motorsport DVD has been released and is now in stock to buy here via the V8 Sleuth Online Store.

The legendary Lakeside circuit in Queensland is the focus of this latest release with three classic Australian Touring Car Championship rounds from the Group A era featured.

The first from June 1985 features BMW hero Jim Richards tackling the likes of Dick Johnson’s Mustang and the Mobil Holden Dealer Team Commodores of Peter Brock and Larry Perkins in the eighth round of that year’s championship.

Held over 35 fast and furious laps of the sweeping 2.4-kilometre layout, this race came in the first season of international Group A touring car regulations in Australia with an entry list for this particular race featuring BMW, Ford, Holden, Volvo, Alfa Romeo, Toyota, Mazda and Mitsubishi.

Round three of the 1987 championship in April of that year is also featured where local hero Dick Johnson stars early as his turbo Sierra carves up his home track in a short-lived charge to the front.

The nimble BMW M3s are left to battle Glenn Seton’s Nissan Skyline as the V8-powered Commodores of Peter Brock, Larry Perkins and Allan Grice try to keep up in a 60-lap slog around the classic Lakeside layout.

The eighth round of the 1991 championship is also included; in fact the second round hosted that season at Lakeside.

While the Nissan GT-Rs of Jim Richards and Mark Skaife may have claimed the April round, the BMW M3 duo of Tony Longhurst and Alan Jones reversed the tide when the July round rolled around and their little German thoroughbreds more than proved a match for the might and power of the feared ‘Godzilla’ four-wheel-drive beasts in this 50-minute timed race.

There’s no doubt these three classic races from the Group A era are ones to have in the collection, a reminder of some of the best battles ever seen at one of the best racing circuits in Australian motorsport’s history.

There’s a range of other Seven Sport Magic Moments of Motorsport DVDs that have been released – if you’ve missed any, order here from the V8 Sleuth Online Store.