Home News LITTLE AND BURGESS GONE: WHAT NOW FOR TEKNO? 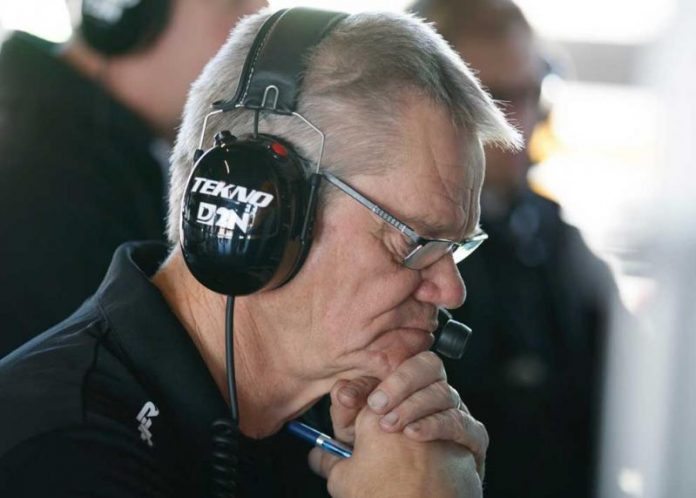 STORY: WILL DALE
IMAGE: AN1 IMAGES

SUPERCARS has moved quickly to bolster its technical department under new boss Adrian Burgess, with Campbell Little joining his former boss at TEKNO Autosports for 2019.

Little will take up the newly-created Motorsport Techincal Manager role working under Burgess, who was announced last October as Supercars’ new Head of Motorsport.

But, as with Garth Tander’s recent exit from Garry Rogers Motorsport, it does raise a couple of things to ponder.

Especially for TEKNO Autosports, who was the employer of both men in 2018.

In the space of a few months, the 2016 Bathurst 1000-winning squad has lost both its team manager and its chief engineer.

Burgess and Little are two of the most experienced, sharpest and savviest operators in pit lane, and should bring a healthy perspective and guidance to Supercars’ technical direction after previous incumbent David Stuart’s move to CAMS.

The people that take their places at TEKNO havebig shoes to fill.

All the attributes listed above about Burgess and Little made them a good combination for the Jonathon Webb-owned team, especially last year working with Jack Le Brocq in a season that saw him finish as the best rookie in the championship standings.

TEKNO is a team renowned for keeping its cards close to its chest – remember, it still has yet to formally confirm a driver for 2019 – and V8 Sleuth understands announcements will be made in due course.

Little had spent the preceding five seasons helping to build Triple Eight Race Engineering into a title-winning powerhouse, and took up Supercars’ offer of the Category Technical Director role in January 2009.

“Campbell is one of the sharpest technical minds and most respected men not just in V8 Supercars but in the world of motorsport,” then-V8 Supercars CEO Cameron Levick said.

“He brings with him a vast knowledge of the game and the highest regard within our business. We could not have hoped to make a better appointment for this role in a time of positive change for our sport.”

But the middle of 2009 saw the emergence of “Splittergate”, when a host of Holden teams protested the front spoiler mounts of Triple Eight-built Ford Falcons, suggesting they were flexing in order to allow the front bar to move at speed and generate an aerodynamic advantage. Triple Eight maintained it was in order to minimise damage to splitters from hitting kerbs.

Little, having been part of the technical group at Triple Eight that developed the solution, was caught in the middle, ruling that the mounts were legal according to the rules as they were written but would move to change the wording in order to ban them. After much politicking from parties behind the scenes, he stepped down from the CTD role in early June.

“The decision was mine based on a number of factors,” Little said in a release from Supercars at the time.

“It was always going to be challenging and I am proud of the work I have done. I leave V8 Supercars Australia confident the sport is in strong shape.”

The motorsport media was less generous in describing the handling of the affair.

“The V8 board employed an experienced and successful V8 Supercar engineer to take on the role (of technical director) – not the easiest in a highly competitive environment – yet failed to support him the first time there was an issue,” Motorsport eNews’ publisher Chris Lambden wrote in an editorial at the time.

“Little’s handling of the splitter issue may not have suited some, but it was reasonable and honest. No wonder Little has quit.”

A lot has changed in the decade since, and Little returns to the organisation at a time when the relationship between the teams and the sport’s technical bosses is in a healthier place.