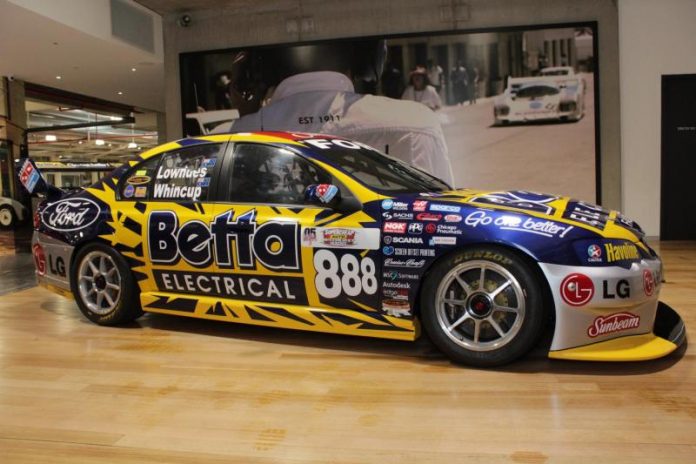 The first Peter Brock Trophy winner would be a great addition to a collection!

THE car that claimed the very first Peter Brock Trophy at Bathurst in 2006 in the hands of an emotional Craig Lowndes and Jamie Whincup is now on the market.

The #888 Team Betta Electrical Falcon BA used to claim victory in the 2006 Supercheap Auto Bathurst 1000 – just a month after the death of Peter Brock – is now for sale from Duttons Garage in Melbourne.

Its victory in the ’06 Bathurst classic was the first of a three-peat of wins by Lowndes and Whincup, using a different Falcon chassis for each of their wins in 2006, 2007 and 2008.

The car on the market won the 2005 Sandown 500 in the hands of Lowndes and Frenchman Yvan Muller before taking pole at Bathurst – many fans will recall this being the car that had its windscreen smashed by an errant wheel from the crashed Castrol Commodore of Paul Dumbrell.

Lowndes drove it during 2006 and finished runner-up to Rick Kelly in the championship in controversial circumstances after their clash at Phillip Island, but its main highlight is its win in the ’06 Bathurst race.

Whincup raced the car in 2007 and he and Lowndes used it to win that year’s Sandown 500. It last appeared in the team’s hands in 2008 with Lowndes at the helm at Eastern Creek after his regular car had been crashed in Adelaide.

Restored to its 2006 Bathurst livery and spec in 2012 and given a shakedown by Jamie Whincup at Queensland Raceway, it has spent most of its recent years on display at the National Motor Racing Museum at Mount Panorama.

To go back and take a look at the action from Bathurst 2006, watch this video: