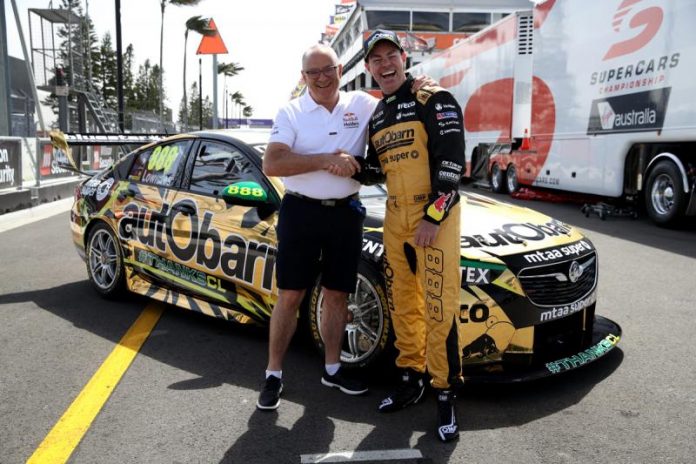 CRAIG Lowndes will race with a stunning gold and black livery on his #888 Autobarn Holden in his final full-time Supercars race at the Coates Hire Newcastle 500.

The livery was a surprise for Lowndes, who first saw it when it was revealed in pit lane a day ahead of opening practice for the veteran’s 294th and final championship event before he steps back into a co-driver role for 2019.

“I didn’t know this was coming!” Lowndes said. “I know there’d been some conversations – Lara, my wife, has been disappearing and taking phone calls all over the place!

“I know there was talk of a gold helmet, but we’d done that at Bathurst. Even when I was given the suit half an hour ago, I thought that was something special.

“But then to see the car getting pushed out … it’s fantastic. There’s a lot of history within the design work of the car and I’m really thankful the team was able to do it.”

Metallic gold and black replaces the Autobarn car’snormal black and silver hues, the design mimicking the blue and yellow Betta Electrical colours that adorned the first cars Lowndes raced for Triple Eight Race Engineering back in 2005 and 2006.

“That’s when it all started for me with Triple Eight, ’06 was an amazing year,” he said.

“For me to be part of the journey with Triple Eight and to have the success as a combination has been really fantastic.

“Roland (Dane, team owner), every now and then he gets emotional, and to see his emotion while revealing the car shows the passion he has for the sport.”

The special livery is the latest addition to the celebrations marking Lowndes’ final full-time event, with the veteran set to drive through an honour guard formed by other teams and drivers before leading the field to form up on the grid for the Sunday race.

Amid the hoopla, Lowndes is also chasing a top-three finish in his final championship season. He currently sits 58 points behind third placed Jamie Whincup.