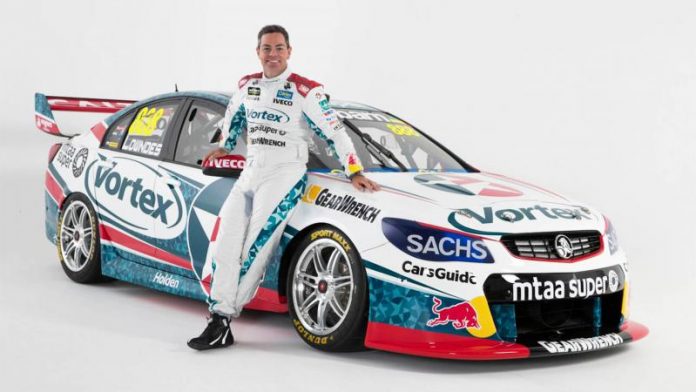 CRAIG Lowndes has renewed his contract with Triple Eight Race Engineering for another two years – the news has been confirmed today.

The three-time champion will remain with T8 until at least the end of 2019.

“I’m really happy to be staying with Triple Eight for at least another two years,” said Lowndes.

“I’ve been here a long time now and we’ve enjoyed a great amount of success together over the years.

“I’ve always said that if I’m still motivated and I’m still competitive, then I’ll keep going. We finished fourth in the championship last year and I’m enjoying racing as much as I ever have, so it was a no-brainer for me to continue.

“Staying on with Triple Eight was always my first choice, so it’s a great feeling for the rest of this year knowing that I’m going to be continuing where I am for the foreseeable future.”

Triple Eight Managing Director Roland Dane is delighted to extend the relationship with the driver who took a risk on an unproven team over a decade ago: “Craig really is part of the family here and it’s terrific that he wants to continue with us for another two years.

“We’ve achieved an awful lot during his time with Triple Eight and we aim to continue building on that into the future with more race wins and of course another Bathurst win.

“There was never a question mark for me over whether we wanted Craig to stay with the team and I’m pleased we’ve been able to confirm the extension relatively early in the season.”

TeamVortex’s naming rights partner, Caltex, is thrilled that Lowndes will be continuing on in the sport.

“Caltex has been by Craig’s side for more than ten years, and this is our second year as the naming rights partner of TeamVortex,” said Karen Bozic, Caltex’s Acting Executive General Manager – Retail &Convenience. “We are excited that Craig will keep on racing.”