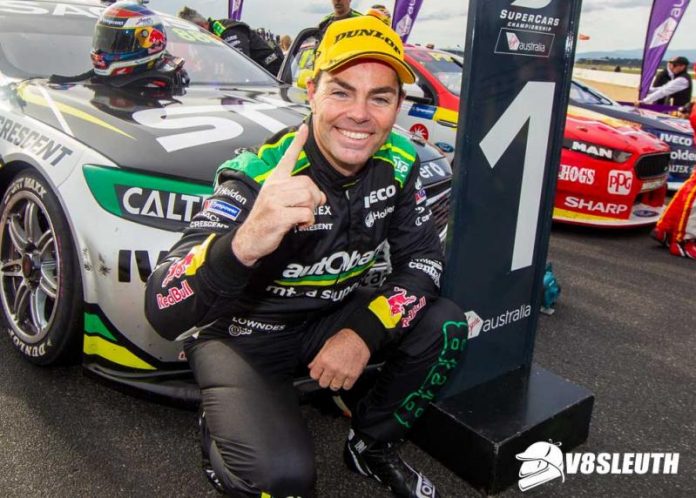 Pole or not, the Supercars veteran will lead the field to the grid for Race 31…

CRAIG Lowndes will have the honour of leading the field to the grid for his final full-time Supercars race at this weekend’s Coates Hire Newcastle 500.

The Sunday race will be the veteran’s 667thand final championship race appearance before he steps back into a co-driver role at Triple Eight Race Engineering next year.

To mark the occasion Lowndes will roll past an honour guard formed by the drivers and teams down pit lane ahead of Race 31, before leading the field around the Newcastle Street Circuit on the reconnaissance lap towards the grid.

The move is just one of the festivities planned for the Supercars’ legend’s final full-time race, with Lowndes also scheduled to take part in a farewell parade lap in a Holden road car during the afternoon.

He will also be presented a mosaic comprised of fan photos submitted to Supercars’ Facebook page or on Twitter and Instagram with the hashtag #ThanksCL to mark the occasion.

“It’ll be emotional,” Lowndes said. “I’m sure it’ll really hit home by Sunday that it’ll be the last time that I’ll be in a Supercar.

“I think it would be nice to be on the top step of the podium on Sunday – if that could be scripted and all the other drivers could be kind to me.”

Although a dream fourth championship is out of reach, Lowndes is within striking distance of a top-three finish in the drivers’ standing.

He is just 58 points behind Triple Eight teammate Jamie Whincup with a maximum of 300 on offer across the weekend’s races.