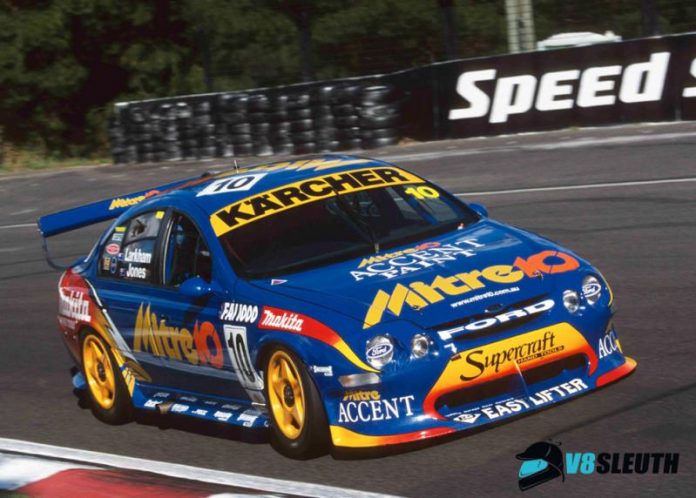 THE team at V8 Sleuth today announced it will hold its first Open Night in Melbourne this year with former V8 Supercar driver/team owner and now Network 10 motorsport TV star Mark Larkham our very special guest coming along to join in the fun.

Tickets are $20 and on-sale now here with numbers limited, so don’t miss out.

‘Larko’ will join V8 Sleuth’s Aaron Noonan to talk about his motor racing career and spend a night of fun with motorsport enthusiasts with a range of elements planned.

To be held on Wednesday September 6 at ONYX Cafe in Cheltenham, Melbourne, the night will include:

– a free gift upon entry for all guests

Nibbles will be provided, the bar will be open and there will even be a special historically-significant race car on display – which will be a surprise for when guests arrive on the night.

“Putting on a night like this has been on our ‘to do’ list for some time, so with the Sandown 500 and Bathurst just around the corner, it’s a great time to get motorsport enthusiasts together and have a night of fun,” says V8 Sleuth’s Aaron Noonan.

“Larko and I go way back and we spent many years working together while V8 Supercars were on the Seven Network; we’re thrilled he’s coming along to join in the fun. There are so many stories he has to tell, so going down memory lane with him will make for a great night.

“Motorsport fans have often told us how they’d love a night that is kind of like a football sportsman’s night, so now we’re doing it!

“We’ll have plenty of prizes up for grabs, a few surprises in store and our guests will also get a chance to be brought into the inner sanctum of V8 Sleuth, the Aussie motorsport industry and some of the projects and items we have under development for the marketplace.

“Tickets are limited, so I’d encourage everyone keen to come along to get in and book their tickets quickly to make sure they don’t miss out and lock their spot in.”