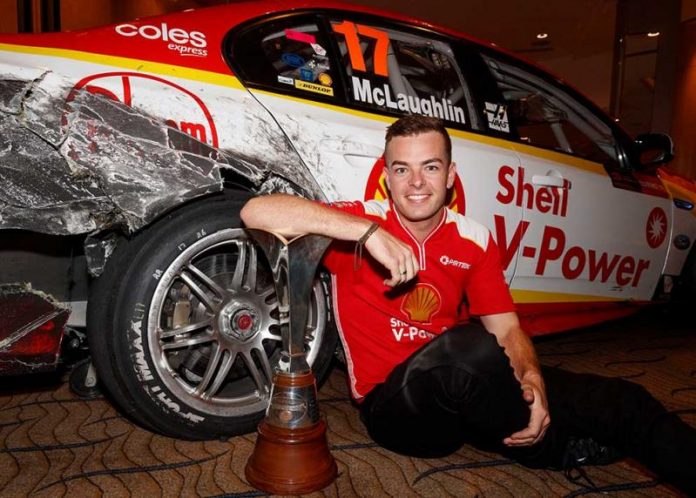 THERE were some emotions when Scott McLaughlin realised he had raced his Supercars title-winning Ford Falcon FG X for the final time.

It was the winningest car on the grid across its two-season lifespan, while the numbers it racked up has earnt it a special place in the Supercars record books.

McLaughlin has only raced one chassis since joining DJR Team Penske at the start of the 2017 season, finally clinching his maiden Supercars title on the final day of the season at last month’s Newcastle 500.

It was later that night, amid the team’s private celebrations, that it dawned on McLaughlin that he’d driven the car for the final time, with a brand-new Mustang-bodied chassis being prepared to wear the #17 in 2019.

“It’s quite sad,” he told V8 Sleuth. “I probably won’t get back in that thing for a while at least.

“She’s been a good girl. The amount of wins and poles we’ve had; we’ve added a few stickers to the door!”

Although heturned his first laps for the team in a different car at a ride day early in 2017, McLaughlin has only had one race car at his disposal for the past two seasons.

McLaughlin’s 29 pole positions aboard the car is a record for any one chassis in championship history.

Its 17 championship wins ranks it fifth among all chassis in the Supercars era and the second-winningest Falcon behind Marcos Ambrose’s dual title-winning car.

It is also the same car McLaughlin used to set the first 2-minute and 3-second Supercars lap of Mount Panorama during the Top 10 Shootout for the 2017 Supercheap Auto Bathurst 1000.

After wrapping up the title at Newcastle, the car was loaded up and trucked to Sydney on the Monday and parked next to the red carpet outside The Westin’s Grand Ballroom for that night’s Supercars Gala Awards.

The car has since returned to DJR Team Penske’s headquarters in Queensland, where it has taken pride of place in the foyer next to Steven Johnson’s Touring Car Masters title-winning Ford Mustang.

As previously reported by V8 Sleuth, DJR Team Penske is hoping to be allowed to send the car to Team Penske in the United States to join the team’s race and championship-winning IndyCars and NASCARs.

If it does, McLaughlin hopes it goes on display exactly as the car finished its final event – complete with rubber marks and panel damage from his celebratory post-race burnout.

“I’d love to just see it sit like that,” he said. “It’d be cool to just spray a big clear-coat over it and just leave it. That would be so cool.”