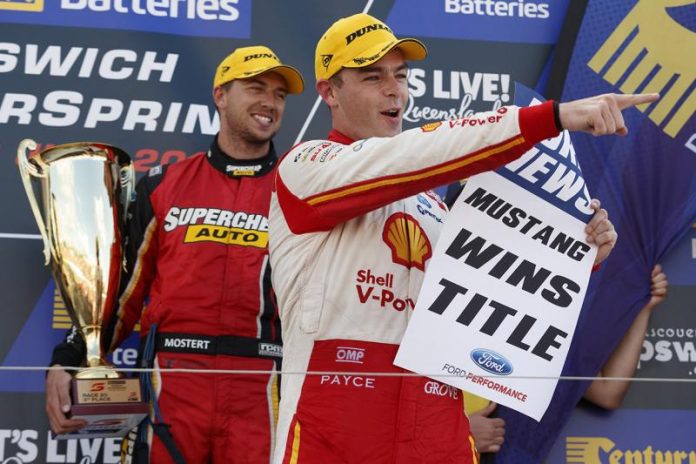 SCOTT McLaughlin’s combined $13,000 fine in the aftermath of his victory in Race 20 of the Virgin Australia Supercars Championship at Queensland Raceway has hit him in the pocket worse than ever before.

McLaughlin’s celebratory burn out past the approved area for burn outs on the slow down lap cost him $3000 and taking a promotional poster celebrating Ford’s Manufacturer Championship-clinching victory onto the podium saw him pinged $10,000.

The result meant that McLaughlin was fined more in one afternoon that he’s ever been fined in his Supercars Championship career!

V8 Sleuth’s dedicated statistical and penalty database reveals that McLaughlin had been fined $10,350 in his time in the ‘main game’ up until the Queensland Raceway round.

However, of those fines, a total of $7500 was suspended for various misdemeanours and he’s only actually had to pay up $2850.

– Sandown 2016, fined $3000 (fully suspended until end of that year) for failing to continue down pit lane to pit exit as required in the end of race procedures after one of the Qualifying Races.

Today’s fine for a poster on the podium isn’t the first time there have been fines – or indeed suspended fines – issued for podium procedure infringements.

Jamie Whincup received a suspended $22,000 fine after winning his first V8 Supercar race in Adelaide in 2006 after being given a ‘Ford wins’ celebration poster in Parc Ferme.

Meanwhile Dick Johnson Racing was fined $30,000 in Adelaide the previous year for having commercial and promotional personnel at the podium after the race.

Team driver Steven Johnson had finished fourth in a Ford 1-2-3-4 and was taken onto the podium for a celebratory photo shot with the podium finishing Ford drivers Marcos Ambrose, Russell Ingall and Craig Lowndes.