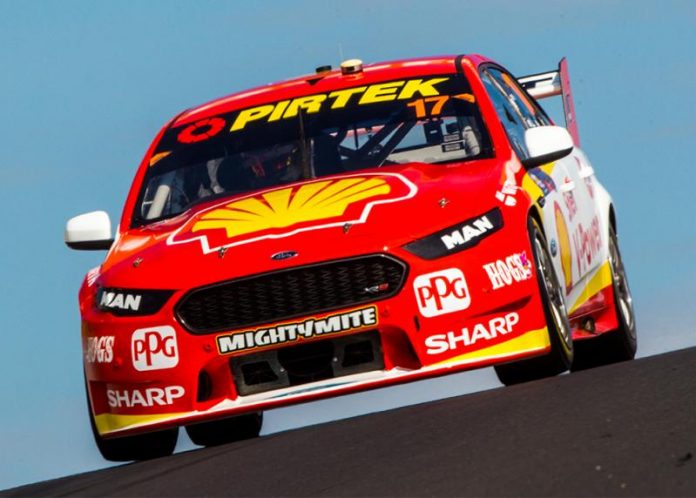 The newest addition to the Biante garage features a record-breaker …

SCOTT McLaughlin created history at last year’s Supercheap Auto Bathurst 1000 when he crossed the line in Saturday’s Top 10 Shootout, stopping the clock in a stunning 2m03.8312s.

The lap was enough to take pole position aboard his #17 Shell V-Power Racing Team Falcon and became the fastest ever lap of Mount Panorama by a Supercar – now you can have your own record-breaking Falcon too!

Biante Model Cars have just released 1:18 and 1:43 scale models of DJR Team Penske’s 2017 Bathurst FG X Falcons, and you can order yours here.

Each model is produced in limited numbers, with the 1:18 scale versions featuring diecast construction and fully opening parts.

The lap was so impressive it has been compared to Greg Murphy’s ‘Lap of the Gods’ from 2003, with both laps showing ultimate commitment and setting new records on their respective days.

Relive McLaughlin’s pole lap in the video below.

Ultimately race day didn’t go well for the Kiwi when his #17 Shell V-Power Falcon ground to a halt before half race distance with co-driver Alex Premat at the wheel.

The team’s Saturday elation quickly turned to disappointment as they watched the Frenchman park the Falcon on the run up the Mountain, with engine dramas leaving the famous #17 out of the race.

DJR Team Penske were able to salvage some joy from the day with Fabian Coulthard and Tony D’Alberto bringing home the #12 Falcon third and scoring the team’s first Bathurst podium in over a decade.

You can celebrate DJR Team Penske’s record-breaking pole lap and their podium finish with Biante producing examples of both the #17 and #12 Bathurst Falcons, available here.