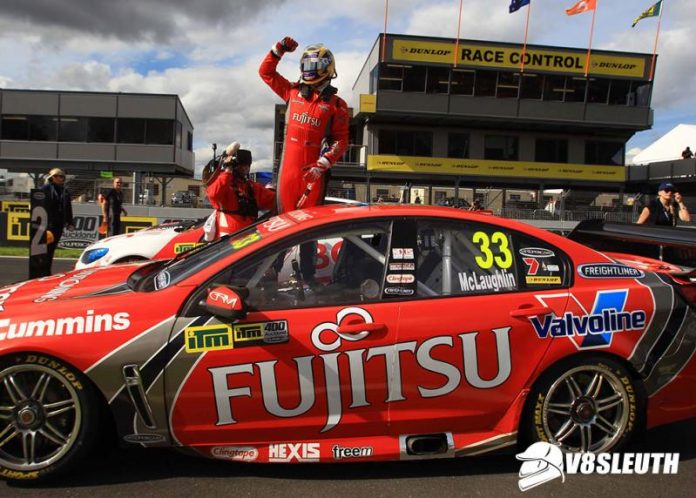 THE car that took reigning Virgin Australia Supercars Champion Scott McLaughlin to his very first Supercars ‘main game’ race win six years ago is being returned to its original 2013 Fujitsu winning livery and is on the market.

The Garry Rogers Motorsport-built and run Commodore VF claimed victory at Pukekohe in New Zealand with McLaughlin at the helm, the young Kiwi racing home to his first Supercars Championship race win in the process.

The car had in fact already given McLaughlin his first Supercars race win, albeit in the non-championship Grand Prix event at Albert Park in Melbourne.

Since then its seen service in the Dunlop Super2 Series and now is in the process of being returned to its McLaughlin/Fujitsu livery from 2013 by Amanda Klein, wife of the late Dragon Motor Racing owner Tony Klein, who owned the car and passed away earlier this year.

“In the early days of Dragon Motor Racing, Tony identified the need to run with the best cars we could obtain and so he purchased these two VFs from Garry Rogers Motorsport,” says Klein, who also is selling the sister car driven by Alex Premat in 2013.

“Like many others in the industry we benefited from the guidance and assistance afforded to us by GRM who welcomed us to the sport and provided mentoring to our new Dunlop Series team.

“The purchaser of these cars is not only buying a fast, competitive V8 with a proven track record, they are buying a piece of Australian V8 Supercar history.”

The ex-McLaughlin car – last raced by Jordan Boys in the Dunlop Super2 Series in 2018 prepared and run by Image Racing – scored three wins in McLaughlin’s hands in 2013 when it won at Albert Park, Pukekohe and Queensland Raceway.

The car was GRM’s first Car of the Future specification chassis that actually began testing in VE II bodywork in 2012 before being fitted with VF panels for its first season of racing in 2013.

The chassis lay idle during 2014 when GRM moved to the Volvo S60 program and again stayed off the track in 2015.

It returned to active duty in 2016 in the Dunlop Super2 Series driven by James Golding and prepared and run by GRM, the young gun scoring his first Super2 race win at Phillip Island that season with another later that year at Sandown.

Jack Perkins drove the car in the 2017 Dunlop Super2 Series with preparation by Image Racing, a return of shorts given he had been McLaughlin’s co-driver in the very same chassis in the 2013 endurance events for GRM at Sandown, Bathurst and the Gold Coast.

For more details on the sale of the McLaughlin Fujitsu Commodore VF, click here.