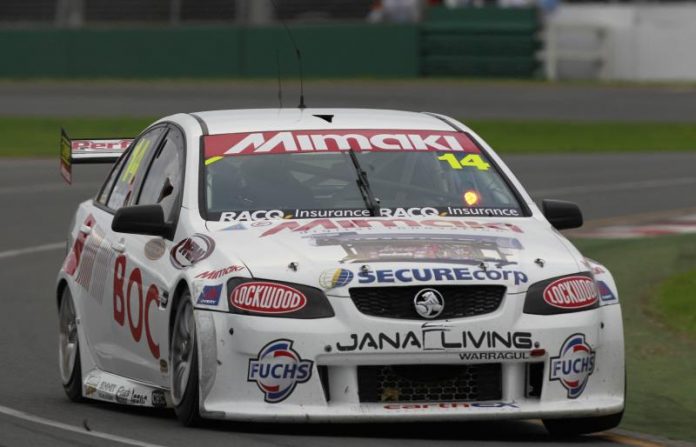 A SPECIAL piece of V8 Supercar history is looking for a special new home.

The Team BOC Commodore VE II driven by the late Jason Richards at Albert Park in 2011 in his awe-inspiring last V8 Supercar race meeting is now on the market here on the V8 Sleuth website.

Richards, who passed away later that year from a rare form of cancer, had stepped down from driving full-time late in 2010 when he had received his diagnosis.

However, he fought back to retake the seat in his Commodore – Walkinshaw Racing chassis 010 – for the 2011 non-championship event in Melbourne.

The whole pit lane was in awe of the ill Kiwi, who willed himself and his car into a stunning second place in the second race of the weekend, leading two laps before finishing behind winner Garth Tander.

The post-race emotive celebrations of Richards, his wife Charlotte, father David and the entire BJR team remain some of the most moving ever seen in the history of the category.

“That car is unbelievably special for everyone here at BJR,” says team co-owner Brad Jones.

“That weekend at Albert Park in 2011 will remain with my team and I for many, many years to come.

“Jason was such a fighter and to see him back in the car despite his very serious illness and achieve such a result was very emotional.

“We built that car specifically for ‘JR’ going into his second season with us for 2010.

“We’d really love to keep it but we only have so much room with three Supercars Championship chassis and spares, three cars in the Dunlop Series and a Kumho Series car.

“It was a really difficult choice between keeping that car or the car we won our first Supercars Championship race in at Barbagallo in 2011 with Jason Bright.

“We have opted for the latter – along with the Audi quattro Super Tourer (that lives up at the National Motor Racing Museum at Bathurst), they are the only two cars that we’ve kept.”

The car had been Richards’ Team BOC Commodore in 2010, built new at the beginning of that season.

It was driven by Jason Bargwanna in all championship events in 2011 before becoming the #21 Wilson Security entry of David Wall in 2012.

Since then it has appeared in the DVS, most recently last year with Macauley Jones at the helm.

A more detailed history of the car is available here to subscribers of the V8 Sleuth website.

With BJR now running Car of the Future Commodores in the Dunlop Series, the ex-Richards car and another ex-Walkinshaw chassis, WR 008, are no longer part of the team’s active racing fleet and have been placed on the market here on the V8 Sleuth website.

The cars are eligible for both the Dunlop Series and Kumho Tyre Australian V8 Touring Car Series, in which BJR runs a car for Townsville young gun Josh Smith.