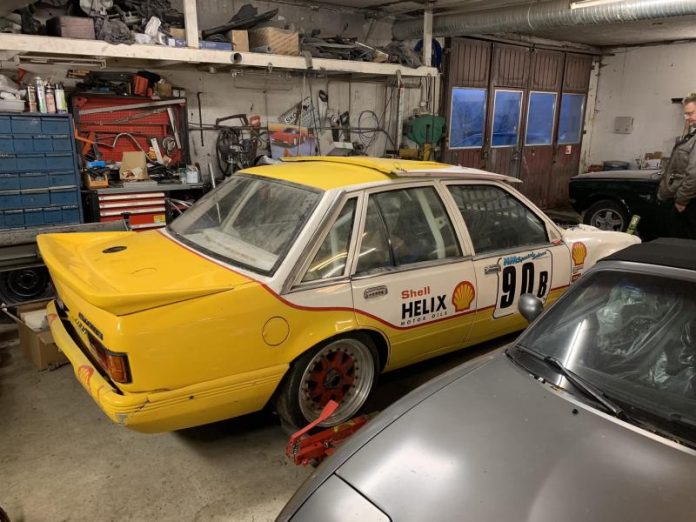 And it’s in Norway of all places!

THE Roadways-built Commodore VK Group A race car driven by Allan Grice in the 1986 European Touring Car Championship looks like it has emerged – in Norway!

The car, which has never returned to Australia since it left local shores to take part in the ’86 ETCC, has been the focus of plenty of hunting by local car collectors in the recent past that had, until now, proven unsuccessful.

However photos of a car – which all point strongly to it being the ex-Grice car – were recently shared on a Facebook group online by a friend of the owner.

The photos show the car in its current state, having not actively been driven in quite some time.

The car is on the market, making it a very appealing potential acquisition for Australian-based collectors and restorers keen to return it to its homeland, 32 years after it left these shores.

According to V8 Sleuth sources, this particular car began its life in Australia for the 1985 endurance races driven by Allan Grice and Warren Cullen before it was updated to the Evolution VK model and taken to Europe the following season.

Grice made quite the impact on the European racing scene in 1986, forging to the lead at Hockenheim with Aussie privateer Graeme Bailey coming on the international trip to co-drive at Monza, Donington and Hockenheim.

The eventual 1986 Bathurst 1000 victor later pressed on with a multitude of pay drivers in the co-driver’s seat for further rounds of the series before the car raced in the 1987 British Touring Car Championship with Mike O’Brien at the helm, run by Alan Docking Racing.

There have been reports that this car ended up in Scandinavia soon after (the Grice car replaced by an ex-Brock Mobil HDT Commodore for the ’88 BTCC), however we look forward to hearing exactly the timeline of how the car came to end up in its current location – and indeed if this car ends up coming back home!

Enjoy this look back at Gricey’s attack on the ’86 European championship….