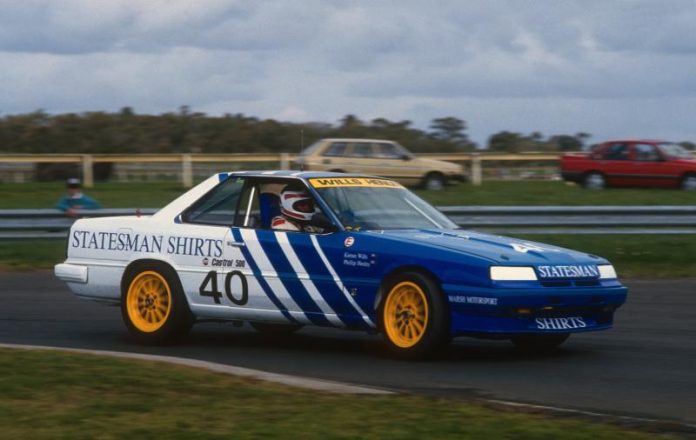 THE rise in popularity of Group A touring cars in the Heritage Touring Car Series in Australia has left many searching for cars that some may have seemed to have disappeared from the face of the earth.

In the case of the Nissan Skyline DR30 campaigned very briefly in late 1987 in Australia by Kiwis Keiran Wills and Philip Henley, it has re-emerged!

The V8 Sleuth is always keeping his eyes open for cars along these lines and he recently had contact from the car’s current owner in New Zealand asking whether the Sleuth’s ‘Coventry Collection’ image archive may have some photos of it in action.

And indeed the image archive does!

Owner Jaysen Eveleigh says he only has one single photo of the car from its racing career, which totalled just three events in 1987 – the Castrol 500 at Sandown (where it finished seventh after starting 19th), the Calder Park round of the World Touring Car Championship and the Wellington Nissan-Mobil 500 WTCC race.

The #40 Skyline stood out in its blue and white livery and very distinctive yellow wheels.

Wills (whose son Simon would later win the 2001 Konica V8 Supercar Series and the 2002 Queensland 500 for Stone Brothers Racing) and Henley had entered for the James Hardie 1000 at Bathurst, though were immediately cut by the ARDC (Australian Racing Drivers Club) as part of the cull of entries given it was a WTCC round and many overseas entries bumped out many local – and some Kiwi – cars.

The car was then crashed badly in practice in Wellington and was sold to Eveleigh’s father-in-law 17 years ago.

It was repaired from the accident (with a steel roll cage replacing the original alloy cage) and then left to sit in his garage before being acquired by Eveleigh.

Nissan fans will be horrified to hear it has a small block Chev engine in it, but Eveleigh says hopefully one day he hopes to have a Skyline turbo motor returned to its engine bay.

“Once finished I hope to race it,” he tells V8 Sleuth.

“The only class I can run it in seems to be GT1, GT2 or NZGT. I will need to start in some club events as I have never done any road racing, only the odd go karting event given I chose to race motocross instead of karting when I was younger. I’ve only just given up the motocross now.”

He is looking for a donor car in Japan to source a motor, gearbox and firewall to one day put the machine back to its original format.

“I don’t know if I would sell it after I have spent all the time building it. However, I suppose everything has its price and money talks.

“I have got the odd bits and pieces around the workshop from the car. All the old radio gear is out of the car. I was planning on putting a digital dash in it, however I’m now going to mount the old gauge cluster from when it raced last.

“When it was repaired it was set up for the Chev. Then it was stripped apart and ready for paint. But that’s how it then sat for 17 years. I have spent the last seven or eight years trying to convince my father-in-law to put it back together but got nowhere! The car was just a bare shell with nothing in it, not even a brake line.

“I think from memory it was bought by my father-in-law from a broker. It didn’t have the engine and gearbox in it.

“I don’t have any documents on it or the log book as when it was purchased it was a bit of a mess. We have only just sent the old alloy roll cage to the scrap heap.”

Eveleigh sent the Sleuth a few photos, one of how it currently appears and another of how it appeared when he first got the car. They are included in this special feature story.

We look forward to this car one day returning to the circuit – perhaps a savvy potential Heritage Touring Car driver/prospective buyer in Australia may offer Eveleigh a deal he can’t refuse after reading this story!

The V8 Sleuth loves these styles of stories and is particularly keen to know about what is residing in New Zealand – so if you’re a Kiwi with an interesting touring car or know where one is – you really should email the Sleuth here.