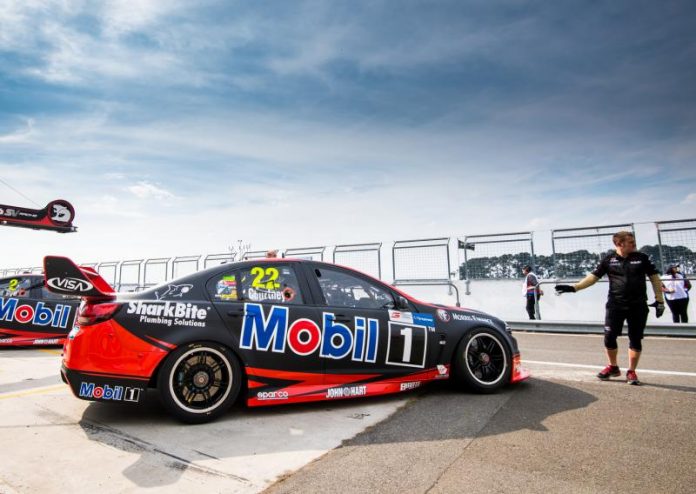 Courtney to move into Garth’s oldcar for Phillip Island …

DAMAGE to his regular Mobil 1 HSV Racing Commodore at Symmons Plains has prompted James Courtney to move into a formerGarth Tander chassis fromrecent years for next weekend’s Phillip Island event – one with a chequered history.

Courtney will move into WR 021, the chassis most recently raced by Tander at Queensland Raceway last year that had been heavily damaged with Warren Luff at the wheel in a spectacular accident during Saturday morning practiceat Bathurst in 2014.

V8 Sleuth’s new book covers the history of every single HRT race car, including WR 021 – don’t miss out on a copy, pre-order it here now.

Repaired, the WR 021 chassisreturned to racing in 2015 in Tander’s hands as the #2 Holden Racing Team Commodore VF, though the Supercars veteran went through something of a slump with the chassis during last yearand was given a new car just prior to the 2016 endurance races.

“Everyone in the team was trying their hardest, the mechanics, engineering staff, but nothing was making sense,” says Tander of the car in the V8 Sleuth’s soon-to-be-releasedbook on the history of every HRT race car.

“You started second-guessing yourself thinking ‘gee, is it me?’. The only thing that kept me sane was jumping in the GT Audi and I was fast in that, so it proved I could still be fast. When we debuted thenew car I was instantly as fast as James and it didn’t take us long to be quicker than him.”

Courtney’s damaged WR 022 chassis has been stripped of its major components and will, over time, be repaired by Walkinshaw Racing.

Practice begins next Friday for the WD-40 Phillip Island 500.

Here’s the accident from Bathurst 2014 with Warren Luff hitting Craig Lowndes aboard WR 021: