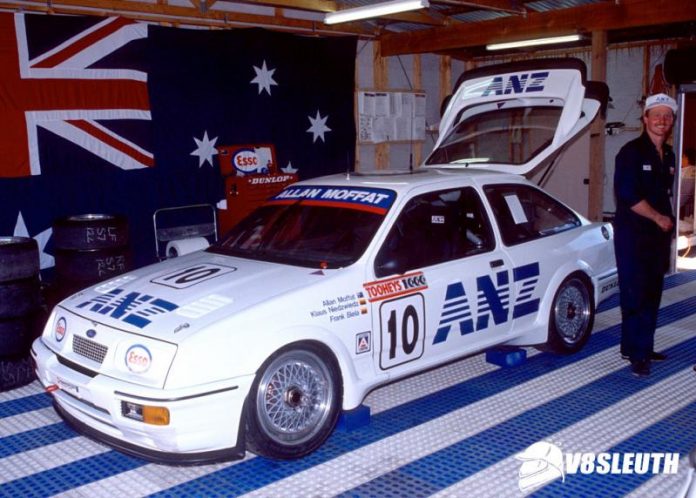 ALL up Allan Moffat’s #10 ANZ/Cenovis Ford Sierra RS500 only competed in four Group A races in its life – and all of them were at Bathurst – and this very special car is the latest to be added to the ever-expanding files of the V8 Sleuth database of race cars.

Built in 1989 by Eggenberger Motorsport specifically for Moffat’s Bathurst campaign, the car finished second in that year’s race in the hands of Germans Klaus Niedzwiedz and Frank Biela and took pole in 1990 with the former at the wheel.

The car lives on in the hands of Queensland collector Peter Jones, who spoke with V8 Sleuth earlier in the year about this car.

“It’s an original car, it hasn’t been painted and it hasn’t been tampered with and inside and outside it’s as it was completed by Ruedi and his team,” he told us.

“My son Harrison drove it recently (Phillip Island Classic in March) and nothing has put as big a smile on a 17-year-old’s face as driving a Sierra around Phillip Island! When I first drove it I was expecting it to be a lot more intimidating to drive. It’s a really nice car to drive the way it has been set up.

“It’s in our collection as a car we will bring out for special occasions rather than being a full-on race car regularly out on the track. The originality influences that; a lot of other cars were crashed and banged over their time.

“Allan (Moffat) always said it was a special car for him and was built specifically for Bathurst. It had some great drivers in it over the years and is a top shelf car when it comes to Sierras so it’s pretty special.”

V8 Sleuth subscribers can view the car’s full history file here – if you’re not a subscriber, check out the YouTube video below of former owner Duncan McKellar peddling the turbo Ford around Morgan Park in June 2016!