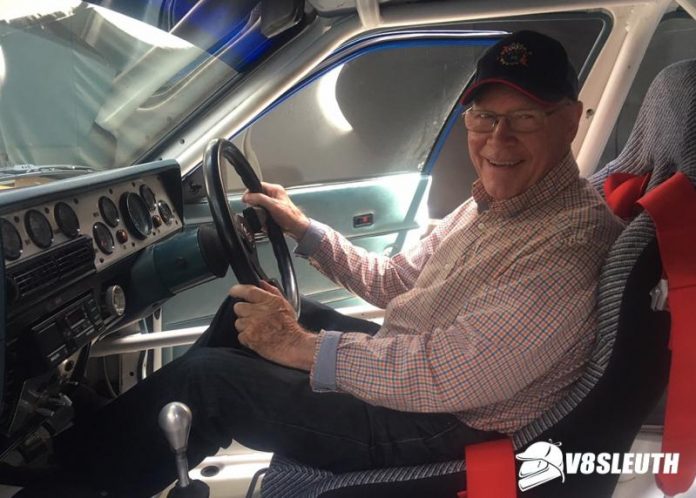 RACE fans around Australia were placed into a state of shock when long-time Ford hero Allan Moffat announced he would be driving for the Holden Dealer Team in 1986.

The match-up was a ‘joining of the forces’ as Moffat paired with long-time rival, and Holden hero, Peter Brock for an assault on endurance races in Europe and Australia.

The duo completed select rounds of the 1986 European Touring Car Championship before returning home for an attack on Australian endurance classics, the Sandown 500 and Bathurst 1000.

Moffat was reunited with the very car that took himself and Brock to their one-and-only Bathurst 1000 together, viewing the lovingly restored Holden Dealer Team VK Commodore recently in Melbourne.

Having spent many years tucked away in Perth the car was purchased by a Melbourne collector and returned to the specification it ran in the ’86 October classic.

The four-time Bathurst winner recently spent time with the Commodore, signing the transmission tunnel of the VK next to a lasting signature of his former teammate Brock.

The car, HDT 14, was the only new Holden Dealer Team car to be built in 1986 and the last VK Commodore to be produced by the team.

It made its debut in the hands of the ‘super team’ at the Sandown 500 where Moffat and Brock recorded a fourth place finish, a lap down on the winning Nissan Skyline of George fury and Glenn Seton (read about Seton’s recently announced engineering role here).

Unfortunately the car is most famously remembered for its crash in practice at Bathurst that year with Moffat behind the wheel, when the four-time Bathurst winner dropped a wheel into the verge at the exit of McPhillamy Park.

The iconic pictures showed the car nearly escaping the track over the wall at Skyline!

The project to repair the car and get it onto the grid for Sunday’s race swung into action and the smashed chassis was sent straight to the Holden dealer in Bathurst while a show car in Melbourne was raided for parts to be sent up.

Being sponsored by Australian Airlines helped too – reportedly the airline held up a Sydney-bound flight at Melbourne Airport so the parts could make the plane!

Brock drove the repaired Commodore to the track under police escort on the morning of the race and started from 11th on the grid given the car was a non-starter in Saturday morning’s Top 10 Shootout.

Ultimately they would wind up finishing fifth, delayed by six-odd minutes after splitting an oil cooler on the notorious speed humps then in place in the pit lane.

The #05 Mobil Commodore returned for the beginning of 1987 with Brock and Moffat claiming their second straight win at the season-opening Wellington 500 street race in New Zealand.

They also competed at Pukekohe’s 500-kilometre race and finished third – which turned out to be an historic event given it was the last time the factory-backed Holden Dealer Team competed and the final time Moffat and Brock would team up.

Brock drove this car in the opening two rounds of the 1987 Australian Touring Car Championship at Calder and Symmons Plains before new teammate Gary Scott crashed it during private practice for the next round at Lakeside.

Eventually it was repaired and updated to the newer VL model bodywork for then Channel 7 commentator Neil Crompton to make his team debut in later that year at the Pepsi 250 at Oran Park with Jon Crooke.

The car made its last start with the Mobil Holden Dealer Team at the Adelaide Grand Prix support races in ’87.

HDT 14 made its last public appearance at the 2016 Supercheap Auto Bathurst 1000 as part of a display commemorating the 10-year anniversary of Brock’s passing and was driven by Garth Tander in a pre-race tribute to the nine-time Bathurst winner.

While the collaboration between Moffat and Brock didn’t yield a top result at Bathurst it was indeed a spectacular moment in Australian motorsport to see these top tier rivals come together, something rarely seen today.

The Brock and Moffat pairing may have only lasted a couple of seasons, but there’s something special about seeing Allan with the car he shared with his friend and long time sparing partner.