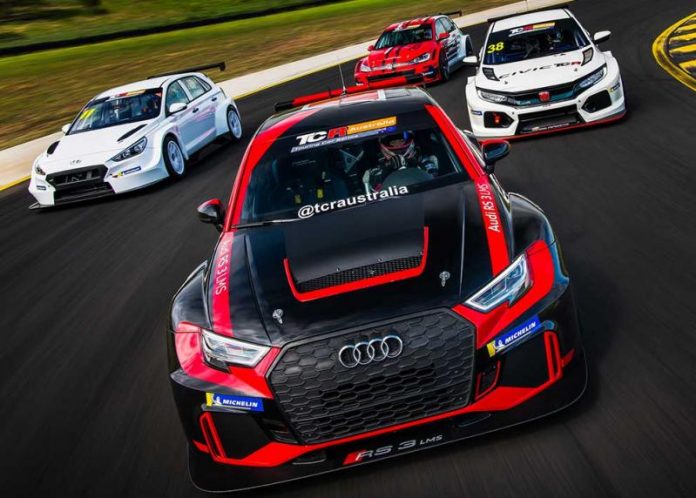 SUPERCARS star Chaz Mostert has described the TCR Series cars as “like a hot hatch on steroids” after a test drive at Sydney Motorsport Park.

Mostert was one of a host of drivers who hopped behind the wheel of four TCR Australia Series cars on Monday as category officials showcased the cars to prospective and potential competitors.

The 2014 Supercheap Auto Bathurst 1000 winner sampled a Hyundai i30 N that will be part of a two-car HMO Customer Racing assault on the championship.

“I haven’t driven too many front wheel drive cars, but it felt pretty cool,” Mostert said.

“As a front wheel drive car, it’s definitely on steroids! You can get quite a lot of speed up and the way it moves around is quite exciting. It also makes you feel pretty safe behind the wheel.

“They are kind of like a hot hatch, front wheel drive GT3 car. It handled really good, and I just love driving different cars.

“They are actually quite comparable to a GT3 car in terms of driver satisfaction.

“Overall, I think TCR is pretty cool and it will be great to see a big field of these. Toe to toe racing, there’s a lot of potential in the series, but really, I’m just stoked to be asked by Barry to come out here and have a drive of the Hyundai.”

“The car is amazing and it’s such a cool piece of equipment,” Poynting said.

“I would definitely love to get into TCR at one point because it’s a world-wide series and it’s a great way to progress onto the world stage compared to other categories in Australia.”

Others on hand included Tony D’Alberto aboard the Melbourne Performance Centre’s Volkswagen Golf GTi, while Leanne Tander turned laps in their Audi RS3.

“I loved it driving the Audi. It was amazing and so much fun. There’s so much power when you put your foot down and it just goes,” Tander said.

“I’d love to race one with 15 or 20 cars around. I think the racing would be great and I hope that I can be involved.”

Another pilot to drive the Audi was Super2 racer Macauley Jones, following in the footsteps of father Brad Jones who claimed two Australian Super Touring Championships in Audi machinery.

“It’s funny how things go around,” the younger Jones said. “I grew up watching videos of dad racing Audis. I even had toy Audis that I used to play with!

“It was very exciting to drive the Audi. My first impression was that I surprised. They are a really nice car to drive. The power delivery was a lot different to Supercars, but the turn in the car was really cool. It was fun to drive.

“It was actually challenging. You need to change your style, so I thought it was really good.”

The opening round of the TCR Australia Series will take place at the Sydney Motorsport Park round of the Shannons Nationals on 17-19 May 2019.