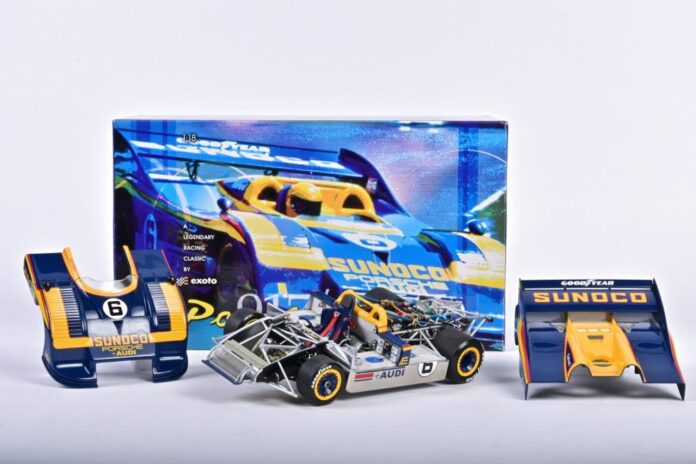 MOTORSPORT writer, and great friend of the V8 Sleuth team, David Hassall is selling many of the model cars, books and memorabilia he has collected over the course of 50 years as a motorsport writer.

Other sports cars include some small-run Can-Am McLarens (M6A, M8D, M8F and M20) and Le Mans cars (Silk Cut and Tullius Jaguars), Exoto Chaparral, Porsche and Sauber-Mercedes, GMP Ferraris (P4 and 312P), Martini Porsches, a Lancia LC2 raced by Aussie Lucio Cesario and a rare example of the sleek Ford P68. Most of these are almost impossible to find these days.

There is even one of only 88 examples produced of Chris Amon’s Scuderia Veloce Ferrari P4, as it raced during the 1968 Tasman Series meetings in Australia. This is one of the most beautiful race cars ever made.

Other local cars include numerous Bathurst winners and the 1960s ATCC-winning Ford Mustangs of Norm Beechey and Pete Geoghegan. There are also some nice Royal Mint coin sets available.

David is a former editor of Auto Action and Motorsport News and is proud to be a friend of V8 Sleuth, having mentored a young Aaron Noonan in the 1990s.

Like Aaron, he has accumulated an enormous library and model car collection in the 50 years since writing his first magazine article as a teenager in 1971, but moving house means a need to downsize.

“It’s amazing what you accumulate in a lifetime working in the same industry, but now I need to clear some space for more – because I don’t intend to stop buying stuff anytime soon,” he told us. “I just have to stop buying two of the same thing!”

The award-winning journalist has written or edited a number of books and now wants to concentrate on writing more books covering the history of motorsport, with two already in progress, so retirement is not yet being considered.

Donington Auctions has listed a selection of David’s cherished items that reflect his lifetime love of local and international racing, all in excellent condition and waiting to be equally loved and appreciated by fellow enthusiasts.

As well as the model cars, there are hundreds of motorsport books and memorabilia covering all eras of the sport in Australia and overseas, including full sets of the Bathurst and Great Race annuals.

The online auction is live now and can be viewed here. It concludes on Sunday (September 12).