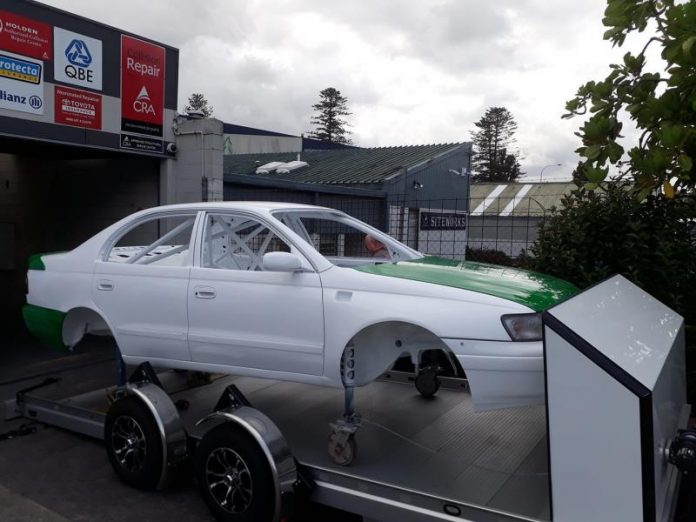 THE CAR that gave Greg Murphy his Bathurst 1000 debut is undergoing restoration in New Zealand – but not back to how it was raced by the four-time ‘Great Race’ winner.

The two-litre Toyota Carina E he and Englishman James Kaye drove in the 1994 Tooheys 1000 has been taken back to bare metal and repainted under the direction of owner Richard McCarthy.

A photo of the car was this week posted onto social media by McCarthy’s brother Paul with re-assembly of the car to follow soon.

However rather than being returned to the Orix livery it carried at Bathurst in 1994 and during that year’s Valvoline Australian Manufacturer’s Championship two-litre series, McCarthy is instead returning the car to its 1993 British Touring Car Championship livery.

The car was one of two Carinas run by Roland Dane’s Park Lane Motorsport in the 1993 BTCC, this car – according to the Super Touring Register website – driven by James Kaye for the majority of the season.

It was sold to New Zealand businessman Bruce Miles for 1994 and made its first appearance in Murphy’s hands at the second round of the two-litre series at Phillip Island.

Murphy drove the car at Phillip Island, Mallala and Oran Park while Kaye drove it at Winton and Lakeside before the duo teamed up for Bathurst.

That year’s race was the last time five-litre V8 and two-litre cars competed in the same race, the Carina finishing 23rd outright and fifth in class.

The Carina later competed in South East Asia and was traded by Miles for a BMW 320i to Stef Zelenak who later sold it to Malcolm Rea.

Queenslander Rea ran the car in Super Touring in its final years under the TOCA Australia banner and then later when two-litre racing carried on as part of The Power Tour.

Murphy made 22 Bathurst 1000 starts, all of them bar his debut in this Carina being at the wheel of Holden products.