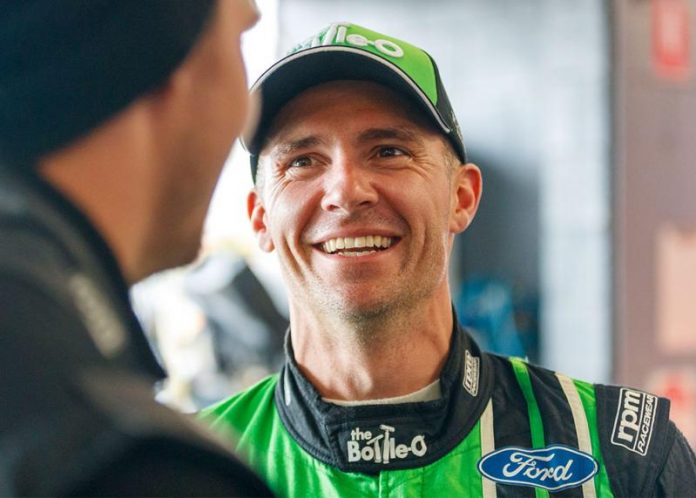 LEE Holdsworth will continue driving for Tickford Racing into the 2020 Supercars Championship – but not in Bottle-O colours.

Holdsworth confirmed on FOX SPORTS’ Supercars Trackside that he has secured a new multi-year deal to remain with the Ford squad for next year and beyond, after joining the team to replace Mark Winterbottom for 2019.

However, his #5 Ford Mustang will change from bright green to black and orange with Truck Assist coming on board as the entry’s new naming rights partner.

“I’m absolutely stoked to be able to say I’m staying with Tickford Racing in 2020 and driving the Truck Assist Ford Mustang,” Holdsworth said.

“We’ve had a great second half of 2019 and I really feel confident in the team and the car, so I’m very happy to be staying put.

“This year’s given my career a shot in the arm. I always felt I have many more good years in me, and this year I’ve been able to prove it, and I’m really grateful to Tickford that I’ll be able to continue fighting for top fives and podiums with them in 2020.”

“Supercars provides us with an incredible opportunity to connect with our customers through a shared passion for motor sport,” Truck Assist general manager Alan Hasted said.

“We’ve thoroughly enjoyed our involvement with Supercars over the past year, and to join one of the category’s premier teams is a fantastic way for us to continue to build connections with the audience.”

The announcement of the sponsorship change on the #5 car raises questions about the future of the team’s relationship with The Bottle-O, which has been a primary sponsor on one of the Tickford’s cars since 2010.

“Today’s announcement does not mean any of our major partners are withdrawing from the team,” a statement from Tickford Racing provided to v8sleuth.com.au read.

“Our commercial arrangements for 2020 continue to develop, and we look forward to announcing further sponsorship signings and renewals in the coming weeks.”

The Bottle-O’s involvement in Supercars dates back to 2007, when they appeared on the windscreen banner of Steve Owen’s #55 Autobarn Holden run by Perkins Engineering under Rod Nash’s franchise.

Blossoming into a full-car sponsorship when Tony D’Alberto and his family team graduated to the ‘main game’ using Nash’s REC in 2008 and 2009, the company’s signature green colours moved with Nash’s REC in 2010 to Tickford – then known as Ford Performance Racing – where it has remained ever since.

The Bottle-O backing remained on the #55 Ford underpinned by Nash’s franchise from 2010 to 2015, scoring race wins with drivers Paul Dumbrell, David Reynolds and Dean Canto.

The sponsorship moved across to Winterbottom’s car for his 2016 season as reigning series champion, where it remained through to this season.

Tickford's signing of Holdsworth and Truck Assist locks in another component of the team's 2020 plans.

The team confirmed prior to the Bathurst 1000 that it has re-signed Cameron Waters and Monster Energy to new multi-year deals, while Will Davison will continue racing the Tickford-run, Phil Munday-owned 23Red Racing entry into 2020.

No driver has been confirmed for its #55 entry, with long-time Tickford driver Chaz Mostert widely expected to depart the team at the end of the season to join Walkinshaw Andretti United for 2020.