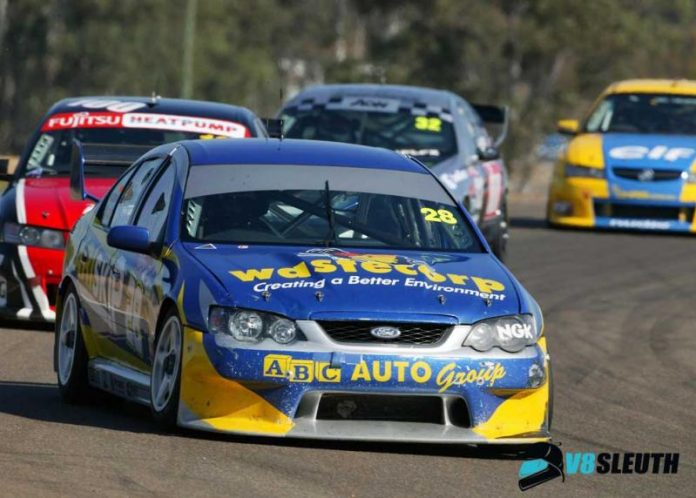 THE Kumho Tyre V8 Touring Car Series field is growing for 2018 with the addition of some new faces set to take the start at round one of the series at Phillip Island in April.

The newest of them is former Saloon Car racer Tony Auddino.

Auddino, who works as a maintenance supervisor in Western Australia, recently purchased an ex-Matthew White BF Falcon (pictured in a V8 Sleuth archive shot from Oran Park 2006) from Peter Rullo after deciding to make the jump into an ex-V8 Supercar.

While the car has no ‘main game’ pedigree, it grabbed media attention as the car that gave a very young Alex Rullo his first taste of a V8 Supercar when the then-14-year-old raced the chassis at Barbagallo in late 2014.

You can trace the history of this, and every Falcon V8 Supercar, in ‘The Falcon Files’ magazine available here in our V8 Sleuth Online Store.

The 32-year-old had been looking to purchase a V8 Supercar for some time and told V8 Sleuth it was a case of ‘right place, right time’ with the BF.

“I had a stop over day in Perth and caught up with a friend who owns a workshop in WA and the Rullo car was in there getting a clutch out,” says Auddino.

“They had a good deal on the car and I took it from there.”

Auddino plans to run the Falcon at three of this year’s rounds, telling V8 Sleuth he will strap in for the Phillip Island, Winton and Tailem Bend events in 2018.

The newcomer has acquired the help of experienced V8 racer Terry Wyhoon to get himself up to speed with Wyhoon’s Image Racing to provide off-track support to the V8 rookie.

“I’ve known Terry for a while and he will help out with setup and a bit of prep work on the car, but at the track we will run it mostly ourselves,” said Auddino.

After six years of racing in Saloon Cars and occasionally in the now defunct V8 Ute Series, Auddino is excited by the challenge and the chance to move into a more competitive series.

“We had a good look at what to do next after doing quite well in the Ute and wanted to do something that was also fun,” said Auddino.

“I’d like to be as close to the top three in the Kumho Cup as possible when we race, although it will be difficult with guys like Michael Anderson and Jon McCorkindale.”

With an ongoing search for increased support, Auddino is hopeful to use 2018 as a platform for a full series assault in 2019.

V8 Sleuth is proud to once again partner with the Kumho Tyre V8 Touring Car Series for 2018 with the season kicking off on April 20 at the fast and flowing Phillip Island Grand Prix Circuit.

The Kumho Series will again compete at four Supercars Championship events plus Muscle Car Masters this year – check out the calendar here.