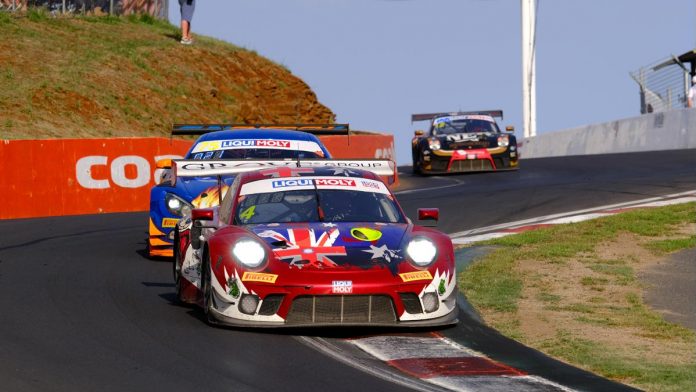 THE BATHURST 12 Hour may be on ice, but there’ll be no shortage of GT racing at Mount Panorama in 2021.

Two Bathurst events feature on the calendar for next year’s Australian GT Championship, which will take place under the new GT World Challenge Australia Powered by AWS banner.

The championship has been rebranded as part of a takeover by the Australian Racing Group and Stephane Ratel’s SRO Motorsports Group.

Its newly released calendar includes a points-scoring sprint round at Mount Panorama as a support to the Bathurst 6 Hour production car contest on April 3-4.

GT cars will then return to Bathurst for a non-championship enduro as part of the end-of-season Bathurst International, for which a date is yet to be announced.

The Bathurst GT enduro will take place over three hours, with two drivers required per car.

It’s expected to be warmly welcomed by local GT competitors, given the Supercars-run 12 Hour has been shelved due to the impact COVID-19 is having on international travel.

The Bathurst 12 Hour’s 10-year history as a GT race has been documented in ‘Bathurst: Going Global’, which is available in the V8 Sleuth Bookshop.

The 12 Hour is scheduled to return in 2022, with the Supercars Championship itself taking over the February slot next year, launching its season with the new 2x250km Mount Panorama 500.

GT World Challenge Australia will race on the Supercars bill at Tailem Bend in May, while it’ll join the Motorsport Australia events at Phillip Island in February and Sandown in September.

ARG CEO Matt Braid hailed the strength of the calendar, albeit with the date and location of its fourth round yet to be announced.

“It is fantastic to secure a calendar that offers a diverse, quality range of events, but most importantly, circuits that offer the best experience for the drivers and teams,” said Braid.

“The GT cars deserve and thrive on big, fast tracks and that is exactly what we strived to achieve in the 2021 calendar.

“The Phillip Island event is going to be a real winner for fans, with TCR Australia, S5000, Superbikes and now the GT World Challenge Australia powered by AWS on the card.

“The two races at Bathurst, one sprint and one endurance race, speak for themselves, while Sandown will be a great setting to crown the first GTWCA champion.

“Since the announcement that ARG and SRO Motorsports Group have come together, interest from the competitor group has been outstanding.

“They are all a pleasure to work with and I’m very confident of a strong turn out of cars and teams for Round 1 at Phillip Island in February.”