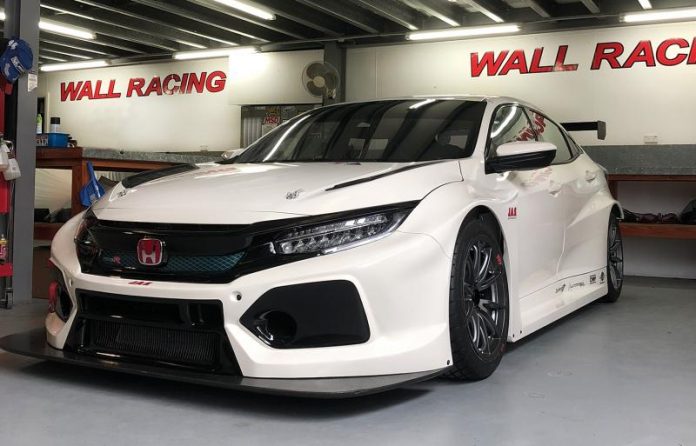 On loan, but looking for a racing home …

A HONDA Civic Type R TCR race car has landed in Sydney ahead of the inaugural TCR Australia Series next year – but it’s not locked in to go racing, yet.

The Civic Type R is owned by Honda’s official global partner in racing, J.A.S. Motorsport, with the intention of partnering with a local Australian race team to enter the TCR Australia Series in 2019.

“Australia has a rich history in motorsport, so it was no surprise to see a TCR Series created down under,” said Mads Fischer, Business Development Manager of J.A.S. Motorsport.

“We have a long history with Honda’s global racing programs, and we are very proud of the business that we have developed alongside Honda to create the best race cars.

“We will be paying close attention to TCR Australia and are looking forward to partnering with the right team to help put Honda on the map in Australia.”

J.A.S Motorsport is based in Arluno, Italy, and also has a bespoke base near the Sepang Grand Prix circuit in Malaysia.

The arrival of the Honda signals the second TCR Series vehicle to arrive in Australia, following the Audi R3 LMS that has been held by Melbourne Performance Centre (MPC) since late last year.

MPC has already secured the exclusive local rights to supply vehicles from VAG (Volkswagen Audi Group), while it was recently confirmed that HMO Customer Racing has purchased two Hyundai i30N TCR cars to race in the series.

“At this stage, the car (Honda) is on loan from J.A.S, however, the intention is for someone to purchase the car, and secure a local distributor for the Civic Type R,” says Matt Braid, Director of series promoter, Australian Racing Group.

“There has been lots of interest, so I’d say that it is just a matter of time before we are able to confirm this.

“In the meantime, Wall Racing has been kind enough to keep the car at its race shop and will assist with running the car in upcoming test sessions.”

Honda race cars are no strangers to Australian motorsport, having competed in Super Touring with an Accord driven by Steve Richards for Garry Rogers Motorsport, as well as production-based racing and rallying at various levels over the past two decades.